Rajasthan is known for its architectural brilliance and for its beautiful ancient monuments and havelis. You can find a number of havelis, forts, old palaces etc when you visit Rajasthan. This place has been a famous tourist attraction especially among foreign tourists. The ancient culture and heritage is well preserved in Rajasthan, which is a major tourist draw from all over the world. The havelis in Rajasthan are the reflection of the royal past that the state had. Kota is small town which is known for its forts and havelis. Among various monuments and havelis in Kota, Haveli of Deaji is one of the famous tourist attractions in Kota, which is worth a visit during your trip to Rajasthan. In Kota, you will find the old is very well blended with new, which is a unique aspect of this place.

A visit to Haveli of Deaji is a must during your trip to Rajasthan. When you visit Haveli of Deaji, you are sure to be spellbound as it is an architectural brilliance. It is built of yellow sandstone, which gives a yellowish effect, along with intricate designs and stone carvings. This haveli was once an abode of the rich and famous but now it is a heritage site, which is open for public viewing.

History of Haveli of Deaji in Kota

Haveli of Deaji Haveli or Daeji Haveli as it is more often called is an ancient haveli which was once owned by a rich and affluent trader in Kota. The ancient structure speaks of the rich cultural heritage and of the glorious past. The building reflects the kind of lifestyle the people of that era used to have and also about the flamboyant lifestyle of the traders.

Tourists are mesmerized by looking at the exteriors of the Deaji Haveli. When they have a look at the interiors they are amazed completely as most of the interiors are well maintained and the rooms are kept intact, so that the tourist can get the idea about the lifestyle of the rich merchants and their families. You can also see certain small miniatures in the wall, which speaks of the artistic skills of the people of that time. Among various havelis and monuments in Kota, Haveli of Deaji has a special prominence as the interiors are well maintained and the visitors can have a look at the frescos and wall paintings.

Other Attractions near Haveli of Deaji

The various other tourist attractions in Kota which you can visit during your trip to Rajasthan are given below: 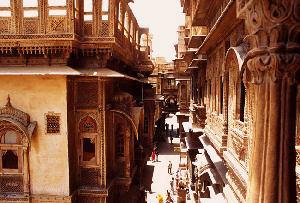 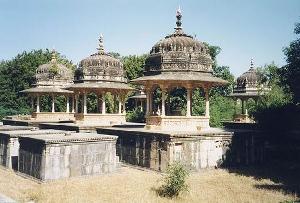