Kumbakonam is one of the oldest towns of Tamil Nadu. The erstwhile capital of the Chola Dynasty, Kumbakonam is known for the picturesque locations, beautiful architecture and colorful fairs and festivals. Located near the Cauvery and Arasalar Rivers, the town is a popular tourist destination in south India.

The popular temple town of Tamil Nadu, Kumbakonam is situated in the Tanjavur district of Tamil Nadu. One of the main attractions of the town is the Mahamaham Festival that is celebrated near the Mahamaham Tank every twelve years.

Apart from being a cultural hub of Tamil Nadu, Kumbakonam is also the center of art and crafts. The handicrafts of the region involve extensive hard work and talent.

The speciality of the Sarangapani Temple is the idol of Gopuram which is 150 feet tall. The temple boasts of 5 praharas and a holy tank which is known as Porthamarai Kulam. The two richly sculptured columns of the temple, Karuvarai and Vimanam are shaped like a chariot. 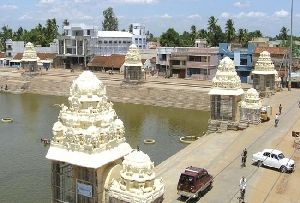