Makutabandhana, Kushinagar when excavated by the archaeologists was covered in a 40 foot high mound of bricks. During the time of excavation it was surrounded by a dense thorny forest. Here you can also get a glimpse of the beautiful stone sculptures of Lord Buddha. The stone figure of Lord Buddha can be seen in Muktabandhana Stupa. The stone figure of Lord Buddha was repaired in the year 413-455 A.D by King Haribala. It was built by a monk from Mathura. This is one of the important monuments in Kushinagar.

Along with the Makutabandhana, Kushinagar there are a number of tourist places which brings people to this city in Uttar Pradesh. One of the major Tourist attractions of Kushinagar is the Nirvana Temple. There is a 6 meters long statue of Buddha in this temple and considered to be one of the sacred sites for the Buddhists. This is one of the unique images of Lord Buddha which shows him reclining on his right side. The inscriptions below reflect that the statue was built on 5th century A.D.

There is a number of interesting tourist places in Kushinagar which you can explore during your tour to Kushinagar in Uttar Pradesh. The Ramabhar Stupa also seems to be quite interesting. One of the sacred shrines of Buddhists this is the place where Lord Buddha attained Mahaparnirvana. 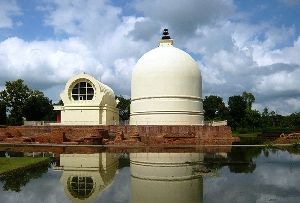 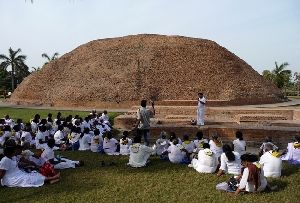 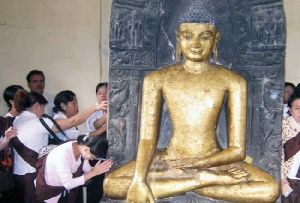