Lying exactly opposite to the eastern side of the very popular Sree Meenakshi Temple is Puthu Mandapam, which was commissioned by King Thirumalai Nayakkar for Lord Sundareswarar. It was originally a temple that was erected as the summer abode of the Lord and his consort Goddess Meenakshi.

Built on a pedestal, this mandapam (hall) is 105 ft in breadth and 330 ft in length. 25 feet in height, the hall consists of 124 pillars that are divided in 4 rows. On both the sides of the central passage, there are striking pillars with figures of 14 rulers of the Nayaka dynasty along with their wives.

The pillars also have the sculptures of the Lord and his better half. Also called Vasantha Mandapam, this hall for the first time was used as the venue of temple’s annual festivities.

The spring festival of Vasanthosavam is one of the main temples that are celebrated here in the month of Vaikasi (April-May). Pudhu Mandapam or Puthu Mandapam was built between the years 1628-1635.

This historically important site is kind of a complex that has a market near it where you can shop for excellent quality cotton fabric. 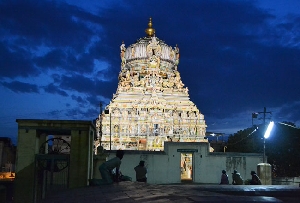