While you are planning your Tour to Madhya Pradesh, do include Mandu in your itinerary. A tiny town, once under the dominance of the Muslims, it houses some of the most interesting tourist sites, like the monuments, mosques, palaces, etc.

Owing to the Muslim rule that had influenced the place for ages, there are a number of Holy Places in Mandu which witness several Mohammedans flocking them even to this day. This, however, is most natural due to the sequence of Muslim rulers from Khiljis and Mughals. To most people’s amazement, though, is the existence of the Jain Temple, Mandu.

The Jain Temple, Mandu is the sole non-Muslim specimen of art and architecture amongst the several mosques and dargahs which clutter the town. Dedicated to the Jain Tirthankaras, the temples house idols made of gold, silver, marble. The eyes of some of the idols are adorned with shining jade eyes. At the rear of the Jain Temple lies a Jain museum, styled in lines of a theme park, has a walk-on replica of the Palitana. There is also a mural of Jain homilies and stories with moral endings.

The Jain Temple in Mandu, attracts tourists from far and wide and from followers of various religions. An important tourist spot in Mandu, you are advised not to give it a miss while you are on your trip to the historical city. 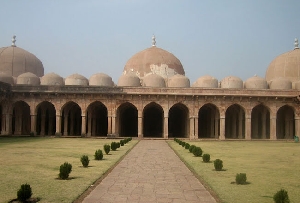