On your Tour to Mandu, you will surely be enchanted by the charm of the Monuments in Mandu. The constructions found in this city are essentially Islamic in their architectural details due to the Muslim rule which dominated the place for decades together. Baz Bahadur’s Palace, Mandu is one such building which has, over the years become one of the most attractive tourist destinations in Mandu.

Baz Bahadur was the sultan of Mandu from 1555 – 1561 and Mandu reached heights of grandeur during this period but only for a short time. However, he had built the palace long before he ascended the throne. It was in 1509 that the wonderful edifice was erected. It stands on the hill above the holy Rewa Kund, a tank, which supplied water by a water lift.

Exhibiting specimens of Mohammedan as well as Rajput culture in its architectural forms, Baz Bahadur’s Palace initially opens up to a sprawling courtyard and flaunts halls on all four sides. The northern side has an octagonal porch with arches on the fringes. Overlooking this pavilion is a garden.

On the southern face of the palace is a terrace on which there are two baradaris - pavilions, which, in turn offer enchanting views of the surroundings.

So, when you are in Mandu, do not miss the visit to Baz Bahadur’s Palace, Mandu as it will certainly provide interesting moments, reliving the past through the arches and porches and pavilions. 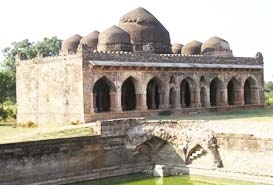 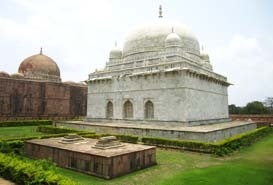 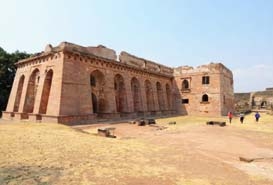 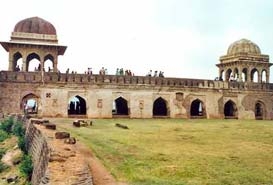 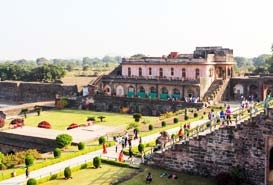