Mathura is very popular as the birth place of lord Krishna which is located on the banks of the river Yamuna on the western part. This holy city is located at a distance of 145 km to the south east of Delhi and in the northwest of Agra at a distance of 58 km. Mathura has been a district of culture and civilization for 3000 years. The creativity in the art forms and all sorts of other related arts of creativity makes our visit to the Government Museum, Mathura almost indispensable. The museum has in store a lot of valuable information that throws light on the various art forms and makes this place worth a visit.

Earlier the name of this museum was Curzon Museum of Archaeology and it was set up by F S Growse in the year 1874. The name was subsequently changed to Government Museum after the celebration of its centenary in the year 1974.

The art connoisseurs are sure to have a memorable time here since this museum is the repository of local sculpture styles and galleries that house the figures of Buddha and the Jain tirthankaras. People say that the first image of Buddha emerged here. One can also find the yakshas and yakshis that portray the Buddha. At this government Museum in Mathura, the visitors will find a change in the Buddhist images from earthy to the sculpted one. This drastic change was most apparent under the Gupta rule that emphasized the images to be more enlightened ones.

This museum is one of the finest among the museums in Mathura and the most extraordinary thing that one can see being in this government Museum in Mathura is the headless figure of Kanishka which is dressed in the central Asian outfit with the large boots and has a sword and sheath in both the hands. The massive number of terracotta pieces includes archaic mother goddesses, plaques from the Sunga period and lots of images that date back to the Kushana and Gupta period.

All these things show how and at what pace the Mathura school reached its pinnacle in the 5th century AD. This museum is closed on Mondays and the government holidays and remains open to the public on the rest of the days from 10:00 am to 5:00 pm. 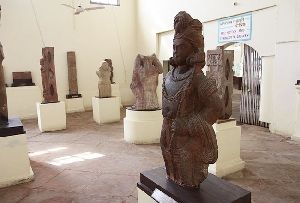