Cathedral of the Sacred Heart

Cathedral of the Sacred Heart in Delhi is located near Gol Dak Khana at the intersection of Ashoka Road and Baba Kharak Singh Marg. Cathedral of the Sacred Heart is popular as one of the most prestigious of Catholic Churches of the capital. History says that when the plan of building this church, was hatched, eight architects were summoned. However, the design was finally conceived by Henry Medd.

As this church was constructed, a panel of judges including Sir Edwin Lutyens and Father Luke, supervised the designs and architecture. You may remember that Father Luke belonged to the Franciscan First Order founded by St. Francis of Assisi and stood for the spirit of fraternity and simplicity. The land of 14 acres of lush greenery, on which the cathedral was formed, was procured in 1920.

The foundation of Cathedral of the Sacred Heart in Delhi was initiated by Rev Dr. E. Vanni, Archbishop of Agra in 1929 and just a year later, the construction commenced. You will be impressed by the sight of the main pristine-white altar of the church made of marble. Records say that Sir Anthony de Mello gave the altar and the Archbishop of Agra donated the bell, robes and other furnishings.

Two schools, Saint Columba’s and Convent of Jesus and Mary flank the two sies of Cathedral of the Sacred Heart in Delhi. Once you explore the elegant and tranquil ambience of the cathedral, you can also visit the nearby Attractions in Delhi.

Cathedral of the Sacred Heart in Delhi is one of the most popular cathedrals in the capital of India. You would be surprised to note that many people including a vast section of the youth don’t visit this church regularly. However, during annual events in Cathedral of the Sacred Heart in Delhi, hundreds of locals and tourists visit this place to witness the gala feast of spirit and mind in Holy Communion with divinity.

While the most important of the annual events in the cathedral are Easter and Christmas, the Feast of the Holy Family of Nazareth and the Christmas vigil service are the most awaited of festivals during the Christmas. The vigil service is held just an hour before midnight on Christmas Eve. You will be awe-inspired to notice the ramifications of the Christmas festivals which are not only celebrated through the ritualistic church services and prayers but through numerous cultural and social programs held annually. Through these social and recreational events, the spirit of fraternity and harmony is spread beyond the closed doors of the cathedral into the niches of the society.

Location: Near Gol Dak Khana at the intersection of Ashoka Road and Baba Kharak Singh Marg to reach Cathedral of the Sacred Heart in Delhi

Special Functions- The Feast of the Holy Family of Nazareth and the Christmas vigil service before Christmas Eve.

You can reach this cathedral by getting on any of the buses plying across Delhi. You can also hire a cab or an auto-rickshaw. If you are somewhere near the Connaught Place, you can also walk down to Cathedral of the Sacred Heart.

Preferred timings: During the morning and evening during prayer services.

Rashtrapati Bhawan is surrounded by lush gardens over 130 hectares. With more than 300 rooms, it hosts the President of India and one housed the viceroy during British period.

India Gate designed by Sir Edwin Lutyens, is a stone arch at the eastern end of Rajpath. Earlier known as the All India War Memorial, it commemorates the deah of 90,000 Indian soldiers in the First World War.

Jantar Mantar near Connaught Place was built by Maharaja Jai Singh II of Jaipur. One of the world's oldest astronomical observatories, each instrument in this observatory has a special scientific function.

Gurudwara Bangla Sahib has a gold-plated dome and white façade towers. In this place, Guru Harkishen Dev, the eighth guru of the Sikhs had stationed himself in 1664.

Hanuman Mandir is a famous temple dedicated to Lord Hanuman. Built by Maharaja Jai Singh, it is located on Baba Khadak Singh Road near Connaught Circus.

You can buy jewelry, books, art, leather goods and Indian and international clothes in Connaught Place. You can also visit Central Cottage Industries Emporium for Indian handicrafts and curios, Baba Kharak Singh Marg for traditional artifacts and Janpath for clothes, gifts and souvenirs and Palika Bazaar for electronic items. 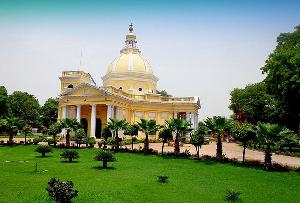 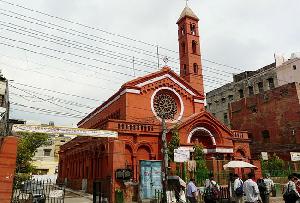