This autonomous body, this imperial guardian of Music, Dance and Drama, the Sangeet Natak Akademi was set up in Delhi by the Ministry of Culture on 31st May 1952. It became functional the next year with the appointment of its first ever chairman Dr. P.V. Rajamannar. The institution enjoys the prestige of being inaugurated by Dr. Rajendra Prasad, first President of India, in a special ceremony held at the Parliament House on 28th January, 1953.

India’s rich cultural heritage manifested through its Music, Dance and Drama is preserved and propagated by the Sangeet Natak Akademi. Being the first National Level Academy of performing Arts, it forms a prestigious platform for artistes both newcomers and veterans to execute their skills and art. To receive a token of recognition in the form of Sangeet Natak Akademi Awards is considered to be of great honor by all practicing and experienced artistes.

A premium institution in itself, the Sangeet Natak Akademi extends its services in managing allied institutions like:

Not merely an academy of art, but the institution also lends an extensive hand in providing facilities like:

As a custodial of the performing arts, the Sangeet Natak Akademi puts up a lot of effort to preserve the various art forms. Not only does it provides grants for research but also shares a part of the State responsibility in nurturing cultural contacts at the National and International level.

A landmark in the field of performing art, the Sangeet Natak Akademi hosts a considerable number of annual events to help the budding talents show their skills and at the same time provides the masters an opportunity to scale new heights. Not only does it plays a vital role in providing entertainment but from the cultural viewpoint of the country, has been doing a great job in fostering cultural relations within India and with the World.

Being a government set up, the annual events of the Sangeet Natak Akademi are beared by the government. National and Regional Festivals and the Yuva Utsav are an integral part of the events. Apart from that, performances by the maestros in the fields as well as new talents are organized. A considerable number of training and scholarship programmes, seminars on dance music and theatre are an added attraction for patrons of the performing arts.

Build By: The Ministry Of Culture

How to Reach: Tourists can either avail buses from different points or can take auto rickshaws, taxis or metro.

The capital city of India, Delhi is the apex of politics, history, heritage and our culture. Strewn with monuments and symbols of the past in almost all the nook and corner of the city, Delhi is a city to be worth visited.

Among places of prime importance is featured the Sangeet Natak Akademi. After an extensive tour of the national academy of music dance and drama, one can also put in the tour list, the nearby tourist attractions. The places of importance are:

The residence of the former Viceroy of India during British rule and now the President of India, this Building is 600 metres long and 180 metres wide. Designed in the neo classical style, built by Sir Edwin Lutyens it is situated on the Raisina hills. The venue for the Republic Day Parade, it is an important landmark in Delhi.

This 42 m structure formerly known as the All India War Memorial, was built in 1931. Standing on the Eastern end of Rajpath, this place is the guardian of the Amar Jawan Jyoti which was lit under it in 1971. This flame of bravery accompanied by a rifle and a helmet is a tribute to all those soldiers who gave their life in the battlefield.

It is one of the world’s oldest astronomical observatories and is situated 250 metres south of Connaught Place. Was built by Maharaja Jai Singh, the second of Jaipur.

The most sacred place for pilgrimage for the Sikh community and the residence of the eighth Sikh guru, Guru Krishan on his tour to Delhi in 1664. Two features in the ‘Haveli’ are mentionable, the Sangat congregations and the community kitchen.

An ancient temple dedicated to Lord Hanuman, this was built by Maharaja Jai Singh and is situated on the Bada Khadak Singh Road.

While visiting the places you can have a quick bite at the nearby eateries like Pizza Hut, Hotel Le Meridien, Delhi Darbar to name a few. If on a shopping spree then visit Connaught Place, Central cottage industries. 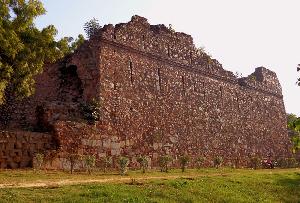