Lakes and Gardens in Orchha

The name ‘Orchha’ literally means ‘hidden’. The name is probably suggestive of the innumerable spectacles that have been camouflaged in the realm of the unknown history of the place. Some of these are in the form of temples, palaces and other monuments, while the others consist of the Lakes and Gardens in Orchha.

Situated in the district of Bundelkhand in Madhya Pradesh, the town of Orchha lies 16 kilometers away from Jhansi and is based on the banks of River Betwa. The place was a strong foothold of a few of the generations of Bundela rulers (belonging to the Rajput clan), the foremost among whom was Rudra Pratap Singh who founded Orchha in the 16th century.

In the centuries that followed, Orchha experienced a series of developments. It was in such a prosperous period of time that some of the most beautiful Lakes and Gardens in Orchha grew up. The Lakes in Orchha were basically artificial that were built in order to facilitate the purpose of irrigation.

Needless to say, the Gardens and Lakes in Orchha, Madhya Pradesh are the principal Tourist Attractions in Orchha in the event of not visiting them, the Tour to Orchha remains unfinished. The Gardens in Orchha, India were also provided with fountains that added to the entire setting. 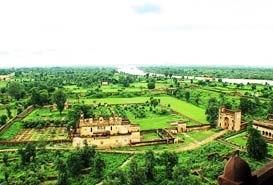