There is a passionate and strong story of love behind the history of the Sunder Mahal in Orchha. This was built by Prince Dhurbhajan, who was the son of the then ruler of Orchha, Raja Jhujhar Singh. Prince Dhurbhajan fell fervently in love with a Muslim girl due to which he even changed to Islam and then spent gave up all his princely ways.

Dhurbhajan spent the rest of his life in meditation and prayers.He retired to the beautifully built Sunder Mahal after marriage. He was venerated as a saint and thus Sunder Mahal in Orchha his residence became a holy place for the followers.

How to reach Sunder Mahal:

Orchha is a place in Madhya Pradesh, about 16 kms from Jhansi, the nearest Railway head. The nearest air route to reach Orchha would be till Gwalior. 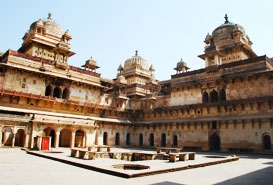