Odisha portrays its striking sides to every visitor. Brahmani River stands out amongst the other popular attractions of the state. Formed by the confluence the South Koel and Sankh Rivers, the river is the second largest river flowing through Odisha.

Before merging with the Bay of Bengal, the Brahmani River team up with the Baitarani and Mahanadi to form a large delta. With a catchment area of about 39,033 square km, the river emerges near Nagri village. The place of origin however is reputed mythologically, as this is the site where Rishi Parashara fell in love with Satyavati. Their son was called as Ved Vyasa, who compiled Mahabharata and hence the place is also known with the same name.

Brahmani River menders through the Eastern Ghats in the Dhenkanal, Sundargarh, Jaipur, Keonjhar and Cuttack districts. The river then merges with the northern tributaries of River Mahanadi. At last, the river mingles with the Bay of Bengal at the Palmyras Point. Sankh, Karo and Tirka are the notable tributaries of the Brahmani River. Further, the Bhitarkanika Wildlife Sanctuary along the Brahmani Delta grabs the attention for housing estuarine crocodiles. Plan a tour to Orissa and visit this major seasonal river. 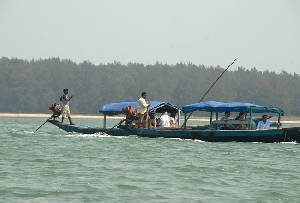