Pachmarhi is a winning combination of beauty and spirituality- with the beauty of its rolling hills and dense vegetations, the ravines, caves and waterfalls combined with the religious significance of the holy places in Panchmarhi.

The Mahadeo Hills are a major pilgrimage center, and one of the major Holy places In Panchmarhi In India. With ancient shrines to Shiva concealed in deep ravines and cliffs. The sacred site of Mahadeo in Chauragarh is the spot where the God tricked the demon Bhasmasur, and Jata Shankar, as the name suggests, resembles Shiva’s untamed matted locks. A dark cave in Jata Shankar has two naturally formed Shivlingas on which water drips constantly from a spring. Pachmarhi is also associated with the Pandavas making the list of Holy places In Panchmarhi In Madhya Pradesh India longer by one.

The Pandava kings of Mahabharata fame are said to have spent part of their 12 year exile in the Pandava Caves or Panch Mathi, which lent its name to Pachmarhi. This place, now known as the Pandav Caves is one of the major Holy places In Panchmarhi Madhya Pradesh. It is an interesting thing to observe that during their 12 year exile, the Pandavas seem to have traveled all the length and breadth of India. One can see the remnants of their dwellings, a pond bearing their name (where they apparently bathed), a temple and many such places that bear testimony to the Pandavas journey from one place to another.

How much of this mythological account is believable is debatable though, but what is important is the fervent belief among the locals of a place that their town or village indeed has been made auspicious by the footsteps of the Pandavas. Panchmarhi is not an exception to this either. Archaeologists have said that the caves known as the Pandav Caves- one of the major holy places in Panchmarhi were actually used by Buddhist monks as residences. But that has failed to make any impact on the local belief. 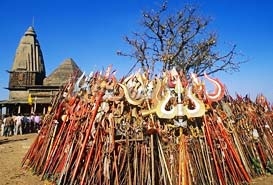