The other famous museum in Punjab is the Maharaja Ranjit Singh Museum. The museum, which is housed inside his erstwhile summer palace, provides a glimpse into the life of the Sikh Emperor. The Ram Bagh gardens which surround the museum display objects related to the everyday life of Maharaja Ranjit Singh. These are the museums which you should visit on your trip to Amritsar. It’s both an educative and fascinating experience to visit these museums and gain an insight into the art and history of the region.

One of the museums in Amritsar is Central Sikh Museum, which was inaugurated in 1958. The museum is home to a large collection of paintings depicting Sikh gurus, saint-warriors and other prominent personalities. Along with this, the museum also boasts a large collection of coins, ancient manuscripts, various kinds of arms and a well-equipped library. A particular attraction for tourists is the rare pencil sketches by Prince Bamba.

Archaeological Site Museum in Sanghol in Ludhiana district is another famous museum. Inside the museum you come across ancient remains dating as far back as the Harappan period during a series of excavations carried out from 1968 to 1990. Another archaeological museum in Hoshiarpur also contains rare antiques and exhibits belonging to an ancient period.

Sheesh Mahal Museum in Patiala also draws visitors in large numbers. One of the main attractions is the Laxman Jhoola, a suspension bridge built over a beautiful tank. Shahed-e-Azam Bhagat Singh Museum in Khatkar Kalian was inaugurated on 23rd March, 1981 on the fiftieth martyrdom anniversary of Shaheed Bhagat Singh. The museum is a tribute to Bhagat Singh and his other associates who revolted against the tyranny of the British Empire. Several photographs, mementoes, a copy of judgment of the 1st Lahore Conspiracy Case, two original pages from the notebooks of Bhagat Singh’s jail diary are also displayed inside the museum. 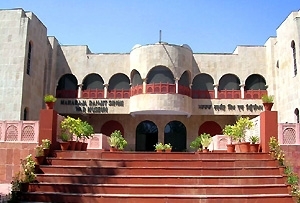