Gundicha Mandir in Puri is the holy abode of Lord Krishna's aunt 'Gundicha'. The temple comes to life during the annual 9 days Rath Yatra. As per beliefs, Lord Jagannath, along with his brother Balabhadra and sister Subhadra spend 7 days at the venerated place. The idols of the three are royally taken in bountifully designed wooden chariot (Rath) from the Jagannath temple to Gundicha Ghar. Here, their aunt welcomes and offers them the chena poda.

The Gundicha temple is extremely popular with tourists and devotees as the Garden House of Lord Jagannath. It is amazing to see numerous large tortoises which move freely and accept food from the devotees. These tortoises are believed to be the dedicated masons of the temple and hence are considered very sacred.

Nestled amidst a beautiful garden known as God’s Summer Garden Retreat, the sanctum sanctorum artistically portray the Kalinga temple architecture. The two gates namely western and eastern gate serve as the entry and exit points of the deities during the Rath Yatra. Hera Panchami, Dakshina Moda, Rasa Lila, Sandhya Darshan and Mahaprasad and Bahuda Yatra are the important events that are celebrated with great zeal. Many legends are associated with the holy shrine which make it a must visit during the Orissa tour. 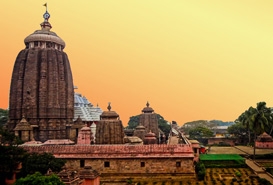