The location of the temple on the outskirts and on the hilly terrain makes it a favorable spot for an outing even for the locales. The Ishwariya Temple at Rajkot in Gujarat in India is visited by many people with a dual purpose, one that attracts the people to the Ishwariya Temple, Rajkot is the spiritual aspect of the temple and second is the location which makes it a favorite outing spot. People of Rajkot often visit the spot during the winter season to have a picnic with friends and families. The hilly terrain and the small pond located near by adds to the beauty and charm of the place. A small fair is also organized here annually.

The spiritual value of the temple is obvious from the fact that people often come in large number irrespective of the distance of the temple from the center of the city. The distance from the center of the city becomes a minimal factor for the people of Rajkot and the tourists alike because of the fact that there are conveyances present which takes the people easily to the Ishwariya Temple of Rajkot in Gujarat in India.

Rajkot stands as a city which holds the perfect example where modernity and tradition merges. Rajkot on one hand stands as an industrial center and on the other hand the holy places in Rajkot represent the Indian religious tradition and heritage.

Rajkot can be reached easily from any parts of India and Gujarat. As Rajkot stands as an important city and is well connected to every part of Gujarat and India by trains and buses, journey to Rajkot is easy and pleasant. Tourists planning to take a flight to Rajkot can also reach Rajkot easily. 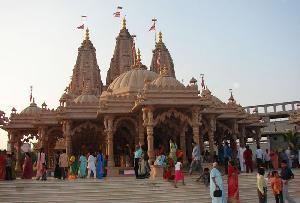