Recognized as a World heritage site by UNESCO in the year 1989, Sanchi is located at the foothills of an isolated hill and is the treasure trove of rich Stupas, Chaityas, Temples, Monasteries, and gateways. These holy Places in Sanchi occupy an important place among the various tourist attractions in Sanchi. All these monuments have beautiful carvings and depict the teachings and life of Buddha.

Sanchi’s holy places could be the most fulfilling experience for the tourists who are on a pilgrim tour and Sanchi is an inevitable destination in their tour itinerary. These holy places have always captivated the tourists who have come here for their tour. The real delight of visiting the holy places in Sanchi comes in the months April/May on Buddha Purnima as Buddhists from the world over gather at Sanchi to commemorate the triple centenary of Gautama Buddha's birth, enlightenment and Parinirvana.

Buddhist Temples in Sanchi were built by the ancient rulers who believed in the spiritual concept of salvation through divine communion with the almighty. Renouncing all the worldly pleasures and material things, they dedicated a hige part of their lives to spread of Buddhism and the Buddhist temples stand testimony to this.

There are many stupas also that house the relics of Buddha preserved in these magnificent dome shaped stupas. These stupas have the scenes from the life of the Buddha and the 4 main incidents that took place in his life: birth, enlightenment, first sermon, maha-pari-nibbana and many other significant events as well. There are some more religious places in Sanchi to visit such as the Gupta temple and the Buddhist Vihara. These holy places in Sanchi also have some of the most striking interior decorations and carvings with lots of sceneries from the jataka tales. 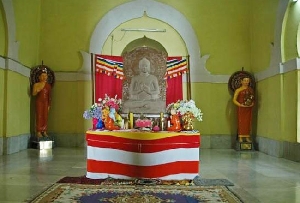 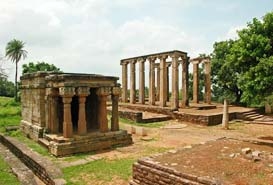