The place where Lord Buddha preached his first sermon, Sarnath in Uttar Pradesh is a scenic destination which is revered as one of the most important Buddhist pilgrimage destinations in India. Sarnath houses the most extensive ruins amongst holy sites on the Buddhist trail. Set amidst well maintained gardens, Sarnath’s ruins are a lovely place to stroll about amidst or meditate in. The Gardens in Sarnath Uttar Pradesh rank integral among the tourist attractions in Sarnath.

The site where Lord Buddha preached his first sermon after attaining enlightenment, Sarnath is one of the holiest places in India. History has it that Sarnath was referred as ‘Mrigadava’ meaning ‘deer park’ and ‘Isipatana’ denoting the place where holy men fell to earth. It is believed that after attaining enlightenment, the Buddha came to Sarnath to a cool and tranquil forest teeming with deer. It is at this deer park in Sarnath that the Lord preached his first discourse.

The name Deer Park got its origin from an occasion in one of Shakyamuni’s former lives as a Bodhisattva. Once, he was leading a herd of deer when a local king began indiscriminate plundering of the herd. An agreement was reached with the king which said that one by one the deer would be offered to him and only when it is necessary. Ultimately it was the turn of a doe who was to give birth shortly, and wished to delay her turn until she gave birth. Bodhisattva offered himself instead of the doe. The king got so moved by this selfless act that he not only vowed to refrain from killing deer in the future, but also gifted the park to them, so that they could always move about in the park unharmed.

One of the must visit gardens in Sarnath Uttar Pradesh - the Deer Park has lotus pools and a sacred Bodhi Tree. This tree was grown from a sapling of the tree at Bodhgaya under which the Buddha attained enlightenment. Towards the south of the Deer park lies the Mulgandha Vihar, the Dhamek Stupa and the Ashoka Pillar – some of the most prominent tourist attractions in Sarnath. 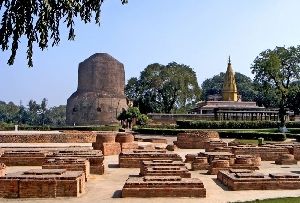