Venerated as the site where Lord Buddha had delivered his first sermon after attaining enlightenment, Sarnath in Uttar Pradesh state of India is among the most important Buddhist pilgrimage destinations in India. Located at a distance of 8 km from Varanasi, Sarnath is easily accessible from important places in northern India and houses several tourist attractions that are worth visiting. Prominent among the tourist attractions in Sarnath are the Museums in Sarnath Uttar Pradesh.

Sarnath in Uttar Pradesh houses a rich and varied collection of sculptures, artifacts and edifices that comprise of numerous Buddha and Bodhisattva images besides other ancient remains. To store and exhibit all such findings and excavations at Sarnath, the Archaeological Survey of India established a site museum in Sarnath. The Archeological Museum Sarnath is a treasure house of some of the finest specimens of Buddhist art and other important remains. Museums in Sarnath Uttar Pradesh exhibits invaluable collection of Buddhist sculptures, heralded among the finest embodiments of Buddhist art.

The oldest site museum of the Archaeological Survey of India, the Archeological Museum Sarnath is one of the major tourist attractions in Sarnath. In order to keep the artifacts found from the site, the government took a decision in 1904, to erect a site museum adjoining the excavated site at Sarnath. Thus was set up the most important of the museums in Sarnath Uttar Pradesh.

The museum in Sarnath Uttar Pradesh displays antiquities excavated from the ruins at Deer Park – the site where the Buddha had delivered his first preaching. The four most important sculptures exhibited at this museum include the Lion Capital, Preaching Buddha Image, Colossal Bodhisatta Image and Buddha’s Life Panels.

The most magnificent specimen of Mauryan sculpture, the Lion Capital once crowned the Ashoka Pillar at Deer Park. A glistening sandstone sculpture, the capital depicts four lions sitting back to back on a circular abacus. The abacus shows four running animals – bull, elephant, horse and lion. The Lion Capital is now the National Emblem of India

The Colossal Bodhisatta Image is a magnificent red sandstone sculpture donated by the bhikkhu Bala in 81 A.D. during the rule of King Kanishka.

The Preaching Buddha Image is one of the finest specimens of Gupta art. It shows Buddha seated in a preaching posture, with a halo around his head. Gifted by King Kumaragupta of the Gupta dynasty, this sculpture is one of the important displays at the museums in Sarnath Uttar Pradesh. 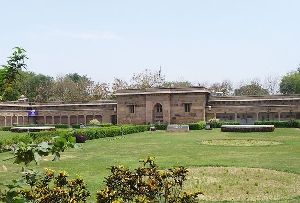