Resting place of the sacred body of Shri Sai Baba, the Samadhi Mandir in Shirdi is a highly devoted temple for devotees and tourists from all over the world. The Sai Baba Samadhi Mandir is one of the star attraction in Shirdi region of Maharashtra. The Shirdi Sai Baba temple was built by one of Sai Baba’s devotees, Gopalrao Booty. It is believed that the idea to construct such a temple came into the dream of Gopalrao Booty, in which the sacred Sai Baba asked him to build this shrine.

The renowned shrine has a statue of Shri Sai Baba in white marble, which was installed in the year 1954 on the day of Vijaydashmi or Dusshera, as the Hindus believe. The temple complex is divided into various divisions like Prasadalay, Donation counters, Darshan Lane, Prasad Counters and Book stall. It is estimated that every day around 25000 devotees and tourists visit the sacred temple. This figure gets four times during the festive season at Shirdi.

At the Sai Baba Samadhi Mandir, visitors also have the privilege to pay ‘Darshan’ to other deities as well. Other than Sai Baba Mandir, the complex has Hanuman Mandir, Mahalakshmi temple, Khandoba temple, Narsimha temple and Jain temple. 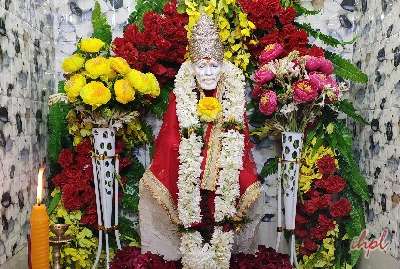 Things To Do in Shirdi