Shravasti holds immense religious significance for the Buddhist and Jain pilgrims. The third Tirthankar, Lord Sambhavanath was born in Shravasti and it was here that he attained the ultimate light of knowledge through meditation. The name of Shravasti holds deep significance in the Jain mythology and finds mention in religious discourses. Lord Sambhavanath is believed to have taken diksha at a Sahetuk forest in the vicinity of Shravasti- soon after which he gave up the royal and luxurious life. For 14 years he went through hard penance till he attained the light of true knowledge in the same forest. After a very long fast, he took his first meal at the palace of King Surendra Dutt and for the rest of his life he went about serving people and himself served the cause of peace and knowledge. Holy places in Shravasti Uttar Pradesh are mostly associated with Jainism and Buddhism.

Shravasti, had been blessed with the touch of Lord Buddha, who spent 24 monsoons in the city, at the Jetvana Monastery. Many Jain Kings such as King Jitari, the father of third Teerthankar Shri Sambhavnath Bhagwan and others ruled Shravasti after Bhagwan Adinath. King Prasenjeet ruled Shravasti at the time of Jain spiritual leader Bhagwan Mahaveer. Prasenjeet was a loyal follower of Prabhu Veer. The main listener of Prabhu Veer King of Magadh was Samrat Shrenik who was in turn was wedded to the sister of King Parasenjeet. Many Jain temples and Stoopas (pillars) were constructed in the city, the ruins of which are now deemed as Holy places In Shravasti In Uttar Pradesh India by the followers of Jainism. Shravasti was also under the influence of Lord Mahavira the last Jain Tirthankar, and the splendid Shwetambara temple here erected by the followers of the Swetambara sect of Jainism, attracts thousands of Swetambara Jain pilgrims. The Sobhnath Temple is believed to the birthplace of the Jain Tirthankar Sambhavnath and one of the most revered Holy places In Shravasti in India.

Remains of Jetavana, a splendid monastery which has inscriptions dating back to the 12th century, is thought to be one of the favorite sites of Lord Buddha, and the site where he spent his days while in Shravasti. Emperor Ashoka is also said to have visited this site. There is a sacred pipal tree here, which is a sapling from the original Maha Bodhi tree under which the Buddha had attained nirvana; the original Maha Bodhi Tree was at Bodh Gaya. Today, at Jetavana you can see remains of two monasteries, six temples and five stupas. One temple was built by the Buddhist monk Ananthapindika and called Gandhakuti. This is the considered the most sacred temple in Jetavana since the Buddha is believed to have lived at this spot and ranks first among the holy places in Shravasti Uttar Pradesh. 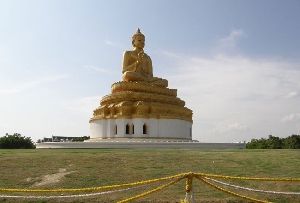