Shravasti or Savatthi was one of the six largest cities in ancient India during Gautama Buddha's lifetime. The city was located in the fertile Gangetic plains in the present day's Gonda district of Uttar Pradesh that was in its prime famous for the Jetavana monastery which lay close to Savatthi. The monuments in Shravasti Uttar Pradesh now comprise mostly of ruins of temples and stupas which were excavated and brought to light by Lord Cunningham in 1863.

The earliest references to Shravasti are available in Ramayana and Mahabharata as a prosperous city in the kingdom of Kosala. The scholar and grammarian Panini in his Ashtadhyayi makes a mention of Kosala while Pali Buddhist literature also makes numerous references to Kosala, its history and society. In the Puranas, Kosala is described as the capital of North Kosala kingdom; Shravasti is said to have derived its name from the legendary king Sravasta of solar race who is stated to have founded the city. In later times, Shravasti was also known as 'Chandrikapuri' and 'Champakpuri'. It is referred to as 'Saravasti' by Kalidas. Anguttara Nikaya mentions Kosala as one of the sixteen great Janapadas or habitations.

Shravasti rose to considerable fame due to its association with Buddha and Mahavira in the 6th century BC, during the reign of Presenajit. During this time Shravasti became one of the eight holy places of Buddhist pilgrimage. Buddha is said to have spent 24 monsoons here after his disciple Sudatta Anathapindika built a monastery for him at Jetavana. Buddha is also said to have performed here 'Great Miracle' and converted the ruthless robber Angulimala into a disciple. Some of the well-known bhikshunis including Visakha, Sumana, etc. hailed from Shravasti.

The Monuments In Shravasti In India include plinths and foundations of temples and stupas that once were centers of much activity. The Anandabodhi tree in Jetavana monastery, Gandhakuti (Buddha's hut) in Jetavana, Stupa of Angulimala, remains of City walls of Sravasti, with ancient city gate, the remains of Jetvana Monastery, the spot where Buddha performed the 'Twin Miracle', Anathapindika's Stupa, are the principal Monuments In Shravasti In Uttar Pradesh India.

Another interesting set of Monuments In Shravasti Uttar Pradesh are to be found in Maheth. Modern day Maheth is said to have been the original site of the city of Shravasti. A cluster of ruins showing remains of city roads, buildings, walls are to be found here in Maheth. 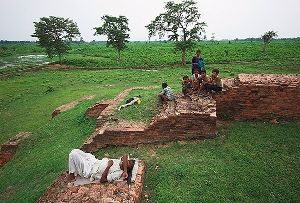