The old palace and monastery complex are in ruins, and now Archaeological Survey of India (ASI) is maintaining and undertaking the restoration works. The place is surrounded by dense forest with a water pond.  When you get on the top of ruins, savor a panoramic view of the valley, the Kanchenjungha peak, and the whole of southwestern region of Sikkim.

As you walk through the chestnut trees, you can spot a stone throne with 3 standing stones named Namphogang by the judge who used to give final judgments in the flourishing days. Do not miss Taphap Chorten, another structure here. On passing the fourth and the last courtyard wall, you can see the palace ruins in the focus. Dab Lhagang, placed along the place is the site where the members of the royal family used to pray to their deities. The decorated entry gate of the palace is yellow in color and is near Pelling-Geyshing road.

The palace and the city was virtually entirely devastated by the Nepalese Army, only leaving the chortens and palace ruins. ASI in the recent times has done excavation and has been able to restore the guard’s rooms, the kitchen, the hall, the public courtyard, the assembly, and the bedroom of the king. 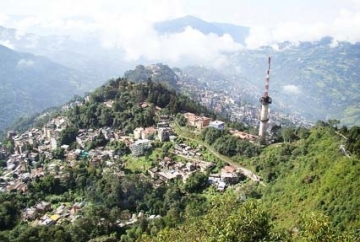