Somnath - this small temple town is one of the foremost tourist destinations in Gujarat, India. It is true that the majestic Somnath Temple enjoys most of the limelight but there are several other Tourist Attractions in Somnath as well. Forts and Monuments in Somnath do not number many but when in Somnath it is surely not a waste of time to visit the few in and around its vicinity.

Veraval, at a distance of just about 7 km from Somnath is its nearest rail head. Visitors enter Somnath through the Junagadh Gate in Veraval. Junagadh Gate is considered to be one of the most important of the Forts and Monuments in Somnath. This triple gate is very old, its ancientness is evident from the fact that it was through this gate that Mahmud of Ghazni entered when he wanted to rout the Somnath Temple. The carvings on the gate are sure to impress any onlooker.

The Patan Gate at Veraval also boasts of intricate carvings and compels bystanders to stare at it with admiring eyes. Since this fortified town belonged to the royal family of Junagadh, there is a Nawabi palace here as well. The walls no longer survive but the palace characterized by gothic features is quite striking. So whenever you are on a Tour to Somnath do find time to visit the Forts and Monuments in Somnath and the surrounding areas. 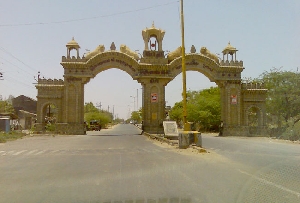