Suraj Tal, also known as Surya Tal, is one of the best attractions in Spiti. The lake is considered to be the third highest lake in India and 21st highest in the world. Placed at an altitude of 4950 m above the sea level, the lake is enveloped by mighty snow-covered Himalayas. It is believed to be a sacred lake and a dip in its waters means getting rid of all the sins.

The lake is quite close to Baralacha Pass, and is also the source of River Bhaga, which descends towards the Chandra Tal. During the summer month, when the surrounding glaciers and mountains melt, water gets transferred into the lake. The surroundings of Suraj Tal are extremely mesmerizing.

Suraj Lake not only allures tourists, but also motorcycling and trekking enthusiasts from all around the world. The lake looks like glistening blue gem lying on a white sheet. Deepak Lake, lying to close, is another popular lake near Suraj Tal. The lake is located in the Upper Himalayan Zone.

How to Reach Suraj Tal

Around 65 km from Keylong, the lake is accessible via National Highway 21, also known as the Leh - Manali Highway. This highway is an important road link for people living in Spiti Valley. NH 21 circles the lake and is just 3 km before the Baralacha La. Reaching the lake via Rohtang Pass to Leh road is not possible between November to April as it is closed due to snow. 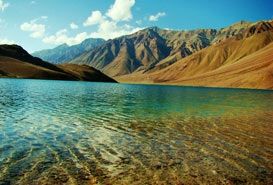