This points out towards the legendary incarnation of Lord Shiva in the guise of Fire element to be true and honest. Apart from the Lord Shiva who is believed to reside in the Arunachaleshwar Temple, Tiruvannamalai as the fire God, Sri Unnamalai is also said to be an inhabitant of the same temple.

The cost of the puja at the Arunachaleshwar Temple, Tiruvannamalai is approximately Rs 300. It has been said in the Puranas that if one is born in the city of Tiruvarur then he can attain salvation easily.

It is here that the famous temple known as the Arunachaleshwar Temple in Tiruvannamalai is located. The name of the temple has been mentioned in the ancient epics and the other legendary tales. So, it has a very important historical past.

The glorious past of this temple is reflected in the circumstance of the temple (hot inside and cold outside). The three main features of this temple are that, in the struggle between Lord Shiva and Lord Vishnu resulted in the celebration of the Kathigai Deepam Festival.

When Goddess Parvati did her penance she was given the left half of Shiva’s body. The spiritual; personages like Guhai Namasivayar, Sheshadri Swamigal and Deivasikamani Desikar are associated with the temple, have contributed to the making of this temple as an absolutely divine and saintly place. The holy water flows with speed in front of the temple. It seems to take away along with its stream the sins of mankind. 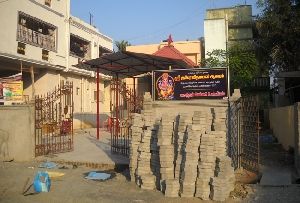