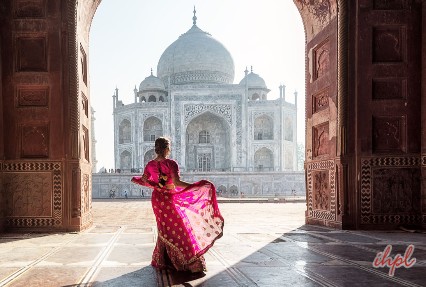 Opt for Central India Temples with Taj, which along with the major religious places in Madhya Pradesh, will also offer you a visit to other popular destinations of India as well. During the tour, you are going to explore places like Delhi, Varanasi, Khajuraho, Orchha, Shivpuri, Gwalior and Agra. A boat ride in the river Ganga, visit to the world-famous Khajuraho and an early morning visit to the Taj Mahal, are the few major attractions of the trip.

After late evening arrival at the Delhi airport or railway station, get an assisted transfer to your pre-booked hotel. Overnight stay.

After breakfast, step out of your room for visiting the attractions of Old and New Delhi.  You are going to cover Raj Ghat, Jama Masjid, Red Fort. Post-lunch visits are going to include monuments such as Humayun's Tomb, Qutub Minar complex. Drive past the city’s important landmarks such as India Gate, Rajpath, President’s House, Parliament House Diplomatic Enclave. Stay overnight.

Get an on-time transfer to the Delhi airport to catch a flight to the holy city of Varanasi. On arrival, check-in to your hotel. Post lunch drive to Sarnath, an important Buddhist site, a deer park where Lord Buddha gave his first sermon. Back to Varanasi. Attend the mesmerizing evening Aarti on the banks of river Ganga. Overnight stay.

Start your day with an early morning boat ride in the river Ganga. Back to the hotel for a sumptuous breakfast. Later, enjoy sightseeing. Cover the major temples and Ghats that will include Kashi Vishwanath Temple, Darbhanga Ghat, Durga temple, Panchganga Ghat and more. Overnight stay.

After breakfast, get transferred to the airport to catch a flight for Khajuraho, the site for a UNESCO World Heritage Site. Its temples are world-renowned.

Once you reach Khajuraho, move to your hotel. Have some rest and later visit the group of temples.

These Hindu and Jain temples, erected during the medieval times in the reign of Chandela rulers, glorify erotica through its sculptures. Overnight stay.

Post breakfast, drive towards Orchha. Move to your hotel once you arrive. Later, leave for sightseeing that may include the Chhatri, Havelis, Raja Mahal, Laxmi Narayan Temple etc. Stay overnight.

After breakfast, hit the road to go to Shivpuri, an ancient town popular for its religious attractions. Midway, take a short trip towards Chanderi to its major historic attractions, which may include Chanderi fort, Badal Mahal Gate etc. Proceed to Shivpuri, on arrival, move to your hotel. Visit the Chattris, a popular attraction. Overnight stay.

After breakfast, leave for Gwalior by road. On arrival, move to your hotel. Relax for some time. Later, leave for sightseeing that might include Gwalior Fort, Saas Bahu temple, Suraj Kund etc. Overnight stay.

After breakfast, leave by road for Agra, the Mughal city. Once you arrive in Agra, check into your pre-booked hotel. Have your lunch, and leave for exploring the popular markets of Agra where you can shop for handicrafts, special embroidered dress material, do not miss buying miniature Taj replicas, Petha and Daal Mooth.  Night stay.

An Early morning visit to the Taj Mahal, one of the Seven Wonders of the World, which looks even more beautiful in the glory of the shining sun. Breakfast at the hotel. Now proceed to visit the magnificent Agra Fort also known as the Red Fort. After having your lunch, back to Delhi by road. After dinner, get transported to the airport or the railway station for your onward journey.