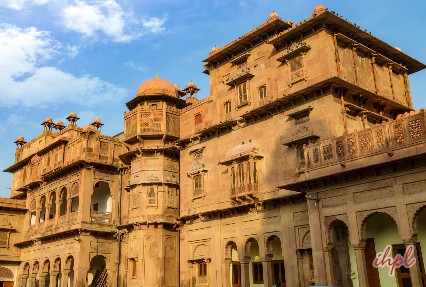 When it comes to the splendors of Rajasthan, they lie in forts, palaces, sand dunes, wildlife and tribal life. Our 14 Days Rajasthan with Taj Khajuraho and Varanasi Tour will bring you face to face with the erstwhile princely states in Rajasthan. Besides, the itinerary will also be  taken to the world of erotica ‘Khajuraho Group of Monuments’.

Late in the evening, arrive at the Delhi airport  followed by assisted transfer to the hotel for overnight stay.

In the morning, embark on a sightseeing tour of Delhi. The places you will visit here include Jama Masjid, India Gate, Gandhi Memorial,  Parliament House, Humayun’s Tomb and the Qutub Minar Complex. Post sightseeing, return to the hotel for night stay.

Post breakfast in the morning, drive to the railway station  to board the train to Bikaner. Upon arrival in Bikaner, check into the hotel for night stay.

Post breakfast in the morning, go out for a sightseeing tour of Bikaner city. The attractions you will visit here include Jungarh Fort (Built in 1611 AD, it was the seat and stronghold of Rao Bika, the first ruler of Bikaner.) Other places you will visit include Karan  Mahal, Bijai Phool Mahal and Anup Mahal. Post lunch, leave by road for Jaisalmer. Upon arrival, check into the hotel for night stay.

Post breakfast in the morning, embark on a sightseeing tour of Jaisalmer. The attractions you will cover include Jaisalmer Fort, Salim Singh-Ki-Haveli, Patwon-Ki-Haveli and Megh Durbar. Besides, you will also visit Lodurva-a small village in Rajasthan famous for its Jain temples. In the evening, enjoy camel ride at the Sam sand dunes. Later, return to the hotel for night stay in Jaisalmer.

In the morning, leave by road for Jodhpur. On reaching Jodhpur, check into the hotel. In the afternoon, go out on a sightseeing tour of Jodhpur covering Mehrangarh Fort and Jaswant Thada, a 19th century white marble cenotaph. Later, return to the hotel for night stay.

In the morning, leave by road for Pushkar. On reaching Pushkar, check in at the tented accommodation. The afternoon is booked to enjoy the camel fair in Pushkar. Stay overnight in the tent.

Post breakfast in the morning, leave by road for Jaipur. On reaching Jaipur, check into the hotel. In the afternoon, go out for a sightseeing tour of Jaipur. The places you will visit here include City Palace (a fine blend of Rajasthani and Mughal architecture), Jantar Mantar, Hawa Mahal and the local bazaars. Later, return to the hotel for overnight stay.

In the morning, take a road trip to Amber Fort followed by an elephant/jeep ride to the main gate. While returning back to the city, see Jal Mahal. Later, drive towards Agra. On the way, visit Fatehpur Sikri. The red sandstone city abounds with various attractions such as Buland Darwaza, Jodha Bai Palace, Jama Masjid, Birbal Bhawan and Panch Mahal. On reaching Agra, check into the hotel for night stay.

In the morning, enjoy the views of Taj Mahal cloaked in the canopy of the rising sun. Built by Shah Jahan, Taj Mahal is the most extravagant monument built in the history of Mughal architecture. Thereafter, have breakfast and explore other attractions in Agra such as Red Fort and Itmad-Ud-Daulah Tomb. Stay overnight in the hotel.

In the morning, drive to the railway station to board the train to Jhansi. Upon arrival in Jhansi, leave by road for Khajuraho. The sleepy town of Khajuraho is around 180 kilometers away from Jhansi. On the way, visit Orchha. On reaching Khajuraho, check into the hotel for night  stay.

The morning is free to relax and rest. In the afternoon, drive to the airport to board flight for Varanasi. Upon arrival in Varanasi, meet our representative and hit the road to Sarnath. Here you will be visiting Dhamek Stupa, Chaukhandi Stupa, Ashoka Pillar and Sarnath Archaeological Museum. Later, return to the hotel for night stay.

Early morning, enjoy a boat cruise on the holy river Ganges. Thereafter, return to the hotel for breakfast. Later, go out for the city tours covering the famous Bharat Mata Temple, Durga Temple and the famous Banaras Hindu University. In the afternoon, drive to the airport to board flight for Delhi. Upon arrival in Delhi, meet the IHPL representative and have dinner at a city restaurant.  Post dinner, drive to the airport/railway station to board flight for onward journey.