Indian Culture is not recent but dates back to the time when human civilization came into existence. The country boasts of over 5000 years of recorded history. Each era has made additions to the vast and diverse culture. Today, the culture of India presents a mix of its long richness and foreign influences that creates a unique experience.

Whatsoever is the period of history, India is known for its hospitality and values. Warmth in the nature of people found here, is not found anywhere else in the world. Not only this, the charm of Culture in India is in all the cuisines, dresses, monuments, old buildings and forts, festivals, music, dance, literature etc...

So, here we begin the journey to know all about the rich Culture of India.

Festivals : A mere mention of India, creates a picture of varied festivals. Home to multi-cultural and multi-religious place is a home to several festivals. Throughout the year, one part or other in India celebrates a festival. Festivals are the very essence of Indian culture and heritage. From religious events, celebrations of the season, days commemorating special events to other occasions, festivals are the remarkable fiestas.

From the start of the year to almost every month, there is one festival or another. Diverse like its landscape, festivals of India are varied. Lohri, Bihu, Pongal, Makar Sankranti, the magnificent parade on Indian Republic day and Jaipur Literature festival is held in January. Goa Carnival, Jaisalmer Desert Festival, Dance Festivals in Khajuraho & Konark, Crafts Mela, and Flower Festivals are held in February. March is made special with the colorful Holi, one of the most popular festivals in India, Elephant Festival, Marwar Festival and more. April too comes with many festivals, like Baisakhi, Bihu and Tribal festivals, etc. May has festivals held in monasteries in Sikkim and Ladakh. The months of June and July have festivities of Urs Fair, Rath Yatra, Teej, etc. Independence Day, Eid Ul Fitr, Janmashtami, Raksha Bandhan, etc. are festivities of August. From October, the festivals are back with Durga Puja, Dusshera, Diwali, and other. November and December have festivals, like Pushkar Camel Fair, music festivals, and celebrations of Christmas and New Year.

So if you are traveling to India and are a festival lover, then make plans. Check the dates of festivals and in which state and how these are being celebrated. The experience of Indian customs is surely one of the best memories the country has to offer.

Cuisines : Rich in India Culture: Indian cuisines are extremely varied and differ from place to place. Most of the dishes are dated back to the history which is thousands of years old. Heritage hotels, five-star hotels, resorts, roadside and all other places to stay in India offers the taste of the most popular food of India.

Lots of spices and herbs are used in the preparation of food in India. Also, different cooking techniques are used for the same purpose. Like the ancient Indian culture, the history of gastronomy too is old. If we look into history, the Vedic period is the time when most of the recipes came into existence. Then new cooking methods were introduced to India during the Middle Ages in Gupta Dynasty. Mughlai food became very dominating during the Mughal Period. Dutch, French, Portuguese and other cuisines of the world too find its place among the food like the culture of India.

Even like period of the history, every state in India has its specialty. When you think of the best Indian food, then there is quite difficult to choose one particular option. Each region has its own specialty to tempt your taste buds. Like East India is famous for its sea food and dishes made of fish as well as many sweet dishes. Goa is also popular for sea food, its Pomfret fish fried is really mouthwatering. Then again India has rich Mughlai food, Hyderabadi food, Gujrati food, rich Punjabi food, spicy Kashmiri Food, Rajasthani food and so on. So enjoy delightful flavors of rich food while you are on your tour to India.

Religion : Religion is a way of life in India. There are diverse faiths, beliefs, religious and sects that worship the almighty in varied ways. India has given birth to so many religions, which are integral part of Indian Culture as every festival, clothes and dishes revolve around this only. If we compare the whole world then Hinduism and Buddhism are the third and the fourth largest religions.

Indian culture and traditions encompass all faiths, beliefs and religions. The divine is worshipped in many rituals, customs, pilgrimages, shrines and even festivals.

Arts and Crafts : Part of Culture of India: The next segment that will show you the rich culture of India is its Art and Craft. Each era has its own style, its own masterpieces and wonders. From tribal handicrafts, to colorful artwork of Rajasthan, Gujarat, South India, and even the Himalayas. Also, particular style of arts and crafts in India find themselves in the list of UNESCO Intangible heritage.

Apart from the handmade creations on display there are cave paintings of Ajanta-Ellora, temple paintings, carvings on monuments also display the Indian heritage and culture.

Sacred Architecture : Architectural heritage of India is about 2000 years old and related to major religions of India. Buddhist Stupas and monasteries, Jain and Hindu temples, their decorative motifs all speak for the culture of India and beauty. Each era has its own addition and masterpieces.

One of the oldest religious monuments in the country are Stupas and monasteries. India then has numerous Hindu temples all across the country that display rich Indian Culture. Khajuraho's Kandariya Mahadev Temple's Shikhara is one of the finest temples in North India. Then there are many South India Temples famous for their architecture, carving, long corridors and spacious halls. Indian Culture also shows very beautiful Islamic architecture. Then there are numerous Churches, Gurudwaras to see in India.

Down south Culture in each city is associated with a specialty. The port city of Mahabalipuram is renowned for its rock-cut monuments, structures in a single stone and bas-reliefs besides its beaches. The Kamakshi Amman temple and the Varadaraja Perumal temples in Kanchipuram are must a visit for the travelers to the cultural destination.

The trip to Trichy reveals the beauty of the ancient culture of India through the architecture in its temples and monuments. The Rock Fort temple, with exclusive rights of 'darshan' to the Hindus and the temple complex of Ranganathar are amongst the many places of interest in the city. The view of the River Kaveri is another mesmerizing experience.

People and Language in India : Culture of India is also displayed by the people and language in India. India in the past had always been a place of interest to invaders and conquerors. All the cultures of these people were adopted, absorbed or metamorphosed with the prevailing culture. So, India has no monolithic culture. India has numerous tribes, 17 major regional language in which Tamil is the oldest living language, Bengali being the most rich in literature. Also, the origin of most of the Indian languages and even foreign languages is Sanskrit. While these tongues are diverse and varied, each speak the language of love and humanity.

Pages fall short when it comes to talk about the culture of India. Experience the unique diversity on your visit to India.

Culture of India at a Glance by State 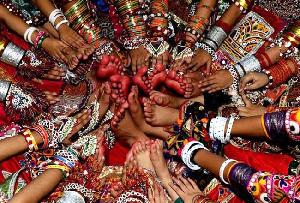