Marriage is an age-old institution and is a highly respected one in India. Marriage in India is a jovial yet sacred occasion that is reflective of the regional, religious and cultural diversity of India. Marriages in India is not only the union of two persons but the lifetime bonding of two souls and what better place to solemnize the event than the temples. The temple weddings in India are a favored and widely accepted concept. Infact, the temples are considered the popular wedding venues in India.

India has no dearth of spectacular monuments and beautiful Hindu shrines. In the ancient times these temples were something more than the mere places of worship. They were the repository of knowledge and culture. They came to be considered the sanctified buildings where one could seek ultimate and eternal happiness. India is replete with number temples that are ultimate examples of architectural brilliance and aesthetic design. Getting married in one of these temples definitely adds a new meaning to the solemn vows that you exchange. The temple weddings in India infuse that element of purity and sacredness into the big event of your life. Some of the world heritage temples in India comprise of the Konark Sun Temple, Khajuraho Temples, Ajanta Caves and the Brihadeswara Temple.

The temples in India are the ideal venues for those who are looking forward to a no-frills traditional marriage. The temples in North India are considered the abode of divine and serene compassion. The commendable architecture of the temples complemented well by the reverential ambience, the temples in North India exude devotion. The South Indian temples appeal to the aesthete within you. Considered the embodiments of rich culture and tradition, these temples also are warrant consideration as venues when it comes to the temple weddings in India.

The temples of the East are characterized by the serene ambience that pervades the temples. Bodhi Temple, Lingaraja Temple, Jagannath Temple and Maha Bodhi Temple need special mention. The western Indian temples grab attention by their ornate design and the eye for detail. The central Indian temples are intricately carved and have awe-inspiring designs. Whichever part of India you belong or travel to, there is no paucity of venues if you want to get married in the traditional Indian way. The temple weddings in India are gaining popularity not only among the Indians but the westerners are also showing much interest.

Other Places for Destination Wedding in India

A Palace Wedding in India can be arranged without much hassle. Since India is a country of varied culture, there are several ways in which the wedding ceremony can be performed.

Beach Weddings are popular all around the world. Over the years, beach weddings have also gained immense popularity in India.

Royal wedding is held in the deserts of Rajasthan, in royal and rich ambience. Rajasthan, India is the ideal place to plan regal and royal marriages.

Royal wedding is very popular in the exquisite Palaces (Forts) of Gujarat, in royal and rich ambience. Gujarat, India is the perfect place to plan regal / royal marriages.

Beaches have an aura of serenity and calmness that embalms them. A Kerala beach wedding is a chance to say "I do" under open skies with the soothing sounds of waves pounding in the background. 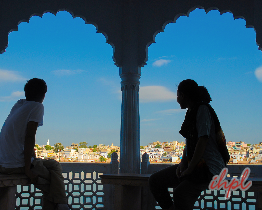