(1)October 2005 - 9 lions have died mysteriously apparently killed. The intense monsoons in Gir this year has lead to unrestrained growth of treeswhich have now started spreading into the savannahs thereby reducing the area of the open grasslands which the big cats like.

(2)2005 - To accommodate the growing lion population the state government is proposing a Greater Gir project which plans to bring forests around Gir, and into which the lions have already started dispersing - like Mitiyana, Jesar, Hipavali, and Paniya, into the fold of Greater Gir thereby giving these areas official 'protected' status. Work for creating the necessary infrastructure, including construction of check dams and water holes has started

(3)July 2005 - One of the victims of the Gujarat floods was a lion which was washed up near Droneshwar dam.

(4)January 2005 - The residents of Virpur village in Amreli district were rudely awakened in the night when seven Asiatic lions raided their cattle - morning revealed the remains of 35 goats, 4 wild pigs, and an ox. While the residents were used to one or two lions straying into the village every week, this was an army which left them shaken.

(5) January 26, 2001 - Gujarat was struck by a severe earthquake which Measured 7.9 on the Richter scale. While humans had no inkling of the disater which was going to strike, the animals in Gir were forewarned of the tremor. The animals started behaving unusually from the night of January 25 and continued till the quake struck. The lions, leopards, cheetal and other deer species started crying loudly and running helter-skelter. The roar of the lions was deafening and they ran with their tails up and erect. Snakes were seen coming out of the holes and climbing trees.

(6) A large number of villages in and around the Gir Protected Area (GPA) that includes the Gir National Park and Sanctauary are using LPG for cooking purposes. This has led to a fall in collection of firewood. The introduction of LPG in the region was taken up under the World Bank - Global Environment Facility (GEF) Gir Eco-Development Project in 1999. 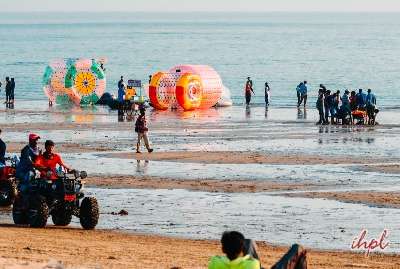