A number of National Parks in India are home to the wide variety of flora and fauna found in the sub-continent. The vast land of India is endowed with the most varied geographical divisions and climatic variations. Naturally, the diverse landscape and climatic conditions serve as natural habitats to its vast variety of flora and fauna. This is the reason each state has a wildlife sanctuary in India. These Wildlife Sanctuaries, tiger reserves, and National Parks have been established all over India with the objective of securing the future of endangered species of flora and fauna by conserving them in their natural environments. Indian holiday provides you detailed information on the Top 10 Wildlife Destinations in India so that your Wildlife Tour in India remains a most memorable one.

Scattered all over the country, the Top 10 Wildlife Destinations in India offer an enormous range of habitats ensuring an exciting jungle safari tour. They extend from the majestic Himalayan peaks in northern India, through forests, lakes, and deserts, to the moist Nilgiri hills in the south, where the coastline is lapped by warm waters of the Indian Ocean. These parks and reserves occupy a place of pride among the wildlife sanctuaries in India. 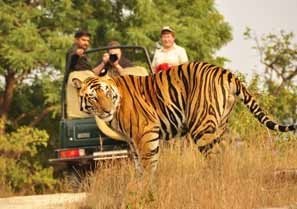 Located within the Vindhya Range, the Bandhavgarh National Park is touted for housing the highest density of tiger population in India. The best view of tigers is guaranteed. 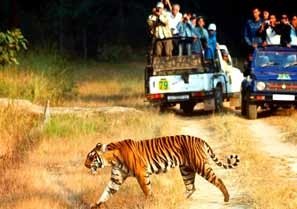 The Corbett National Park is situated in the foothills of the Himalayas and is spread over the districts of Nainital and Garhwal in the State of uttarakhand, located in northern India. 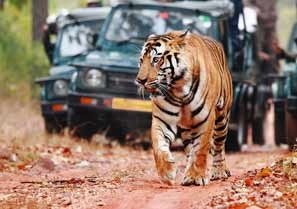 Ranthambore National Park is positioned at the convergence of the Vindhyan plateau and Aravali hill, in the Eastern region of Rajasthan. Two rivers, namely Banas in the North and Chambal in the South, flow through this National Park. 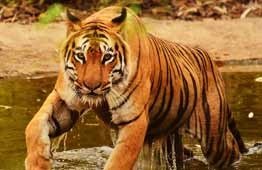 The road to Sunderbans National Park is not dusty; rather it is moist and saline because it is located in the World's largest Delta formed by the mighty Ganges and Brahmaputra. Renowned for its splendid Mangrove Forest, where one may discover the elegant Sundari trees, one of the Mangrove Variety. 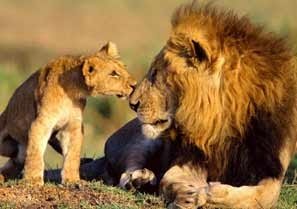 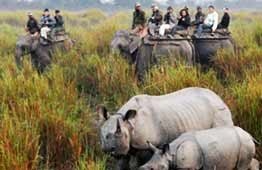 A prominent wildlife attraction in India, Kaziranga National Park is a place where you can study the features and explore the territory of One Horned Rhinoceros. 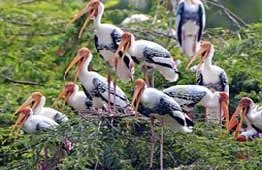 Keoladeo Ghana National Park or Bharatpur Bird Sanctuary as it is more commonly known as, is a wonder of the natural world as the Taj Mahal is to the human world. 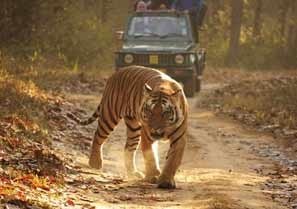 Kanha National Park is one of the world famous tiger reserves located in Madhya Pradesh in the districts of Balaghat and Mandla. The word 'Kanha' has been derived from the 'Kankar' which is used to refer the clayey soil of the valley. 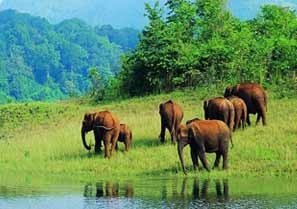 305-sq-kms Set high amid the lofty ranges of the majestic Western Ghats, in God's Own Country Kerala, is the Periyar Wildlife Sanctuary and Tiger Reserve. 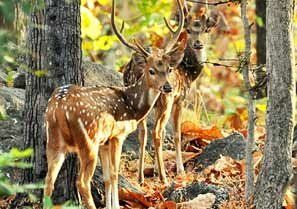 Pench National Park and Tiger Reserve spreads in an area of 257 sq km abd is named after Pench River. This national park won the 'Best Management Award'. it is home to a vast variety of flora and fauna

Bandhavgarh National Park is one of the top wildlife sanctuaries in the state of Madhya Pradesh in India. Also known for the Royal Bengal Tigers, the park is located in the heart of the Umaria district in Madhya Pradesh. Bandhavgarh National Park is famous for tiger safari and photography among wildlife lovers. Former hunting grounds of the Maharajas of Rewa, it is now famed for being the natural habitat of the White Tigers.

Bandhavgarh national park in India Madhya Pradesh is accessible by air, rail, and road. You can easily reach the park from nearby cities by road. The nearest railway stations are at Umaria and Katni from where you can hire a cab to reach the park. If you prefer to travel by air, fly to Jabalpur domestic airport and hire a taxi to reach the park.

Famous for Royal Bengal Tigers, Jim Corbett National Park situated in the Nainital, Uttarakhand is one of the biggest tiger reserves in India. It is one of the oldest national parks in India and the best place for enjoying jungle safari, Tiger safari, & elephant safari. The awe-inspiring landscapes and diverse wildlife attract a large number of tourists from all over the country to take a tiger safari in Jim Corbett.

Jim Corbett National Park in North India is easily accessible from other cities by road, air, and rail. The nearest railway is at Ramnagar located around 12 km away from the park. Ramnagar railway station is connected to Delhi and other cities by daily and express trains. Well maintained road offers an excellent journey from Delhi to Jim Corbett by road. The nearest airport is also Delhi airport from where you can board a luxury bus or hire a shared cab to reach Jim Corbett.

3. Ranthambore National Park -Where tigers are playful with humans

This famous tiger reserve in Rajasthan is easily accessible by air, rail, and road. The nearest railway station is at Sawai Madhopur which is connected to the major cities of India like Jaipur, Delhi, Mumbai, and others by direct trains. The nearest airport is Jaipur international airport from where you can hire a cab to reach the park. Ranthambore Park is directly connected by the road with all the major cities such as Delhi, Jaipur, Agra, Jodhpur, Kota, Ahmedabad, Mumbai, Ajmer, etc.

4. Sundarban National Park - Where tigers take a sunbath on the riverbank

The best way to visit Sundarban from Kolkata which is the nearest airport is a cruise ship from Kolkata to Sundarban. The nearest railway station is Canning from where you can take a 48 Km road trip to reach Sundarban.

The only home of the endangered mighty Asiatic Lion, Gir National Park, and Wildlife Sanctuary is one of the most popular attractions of Gujarat. In 1965, Gir forest was titled as a wildlife sanctuary, and in 1975, it was declared as a National Park. Spread in a huge area of 1412 square km, the national park houses around 38 species of mammals, 300 avifauna species, and 37 species of reptiles and over 2000 insect species which is the main attraction in Sasan Gir jungle safari.

Located in the North-East Indian state of Assam, the Kaziranga National Park is home to one-horned rhinos and tigers along with other species of flora, avifauna, and fauna. This makes the national park one of the best wildlife sanctuaries in India. The best time to visit Kaziranga National Park is between the months of November to April. These attributes have also made the park get listed amidst the UNESCO’ World Heritage Site List. It also provides shelter to about 35 mammalian species, which includes 15 species of mammals that are categorized as threatened under the IUCN Red List.

You can reach Kaziranga National Park from Guwahati, Tezpur, and Dimapur. The nearest railway stations are at Helem (30km) Jorhat (90km). Rowriah Airport in Jorhat is the nearest airport from Kaziranga located at a distance of almost 74km.

Bharatpur Bird Sanctuary is also known as Keoladeo National Park in Bharatpur, Rajasthan. The largest Bird Reserve in India was declared as a protected sanctuary in the year 1971 and was included in the UNESCO World Heritage Site list by the year 1985. It is also home to more than 230 resident and migratory bird species in a protected area of 29 sq. km. The national park is open throughout the year for bird watching and jungle safari.

You can easily reach this national park in Rajasthan by air, rail, and road. The Nearest airport to Bharatpur bird sanctuary is Agra located 54 km away. Bharatpur Junction is located only 5 km away from the national park which is the most convenient way to reach the park. Also, Bharatpur is well connected by road with Agra, Mathura, Delhi, and Jaipur.

8. Kanha National Park - One of the earliest tiger reserves in India.

Located in the centermost state of India, in Madhya Pradesh, Kanha National Park, which was established in the year 1955, is protected land that stretches for approximately 940 km. Kanha National Park is famous for various wildlife conservation schemes initiated by its management, particularly regarding Barasingha and Tiger species.

Nagpur, located about 266 km from Kanha is the nearest airport to reach Kanha in Madhya Pradesh. The nearest railway station is at Jabalpur, at a distance of about 175 km from Kanha. Regular buses run from Jabalpur to Kanha and from Nagpur to Jabalpur via Khawasa for Pench. You can hire Taxis and other vehicles from Jabalpur, Nagpur, Bilaspur, and Raipur to reach Kanha National Park.

Located in the Chhindwara & Seoni districts, Pench national park is a famous tourist spot in Madhya Pradesh and it is the best place to plan a wildlife tour. The park is divided into two equal parts by Pench River after which the park was named.

The Sonegaon airport in Nagpur is nearest to the Pench National park. Regular flights connect Nagpur to all other major cities in India. The nearest railway station to Pench is Seoni Railway Station and regular trains connect the place to Mumbai and other places. Buses and jeeps are available from Seoni which is linked to all places in Madhya Pradesh and Maharashtra by a good network of Roadways.