Some of the few cities which have still kept its cultural heritage well preserved is Hyderabad. A visit to this old city summons nostalgia among the old residents of the city. The buildings, monuments, the mosques and the temples all speak of the rich history that led to their existence. One of the biggest and the oldest Masjids in Hyderabad, the Jama Masjid is the ideal place to go, to explore Islam. It rises with its majestic white towers just a few meters above the Charminar. Jama Masjid is one of the most popular mosques in Hyderabad and is visited by a large number of Muslims every year. It is indeed one of the most attractive examples of Muslim architecture. The Jama Masjid is located only a few kilometers away from the Charminar in Hyderabad.

The Jama Masjid has an ancient Turkish bath within its premises. It is also the center of Daa’wah program within the state of  Telangana. Also referred to as the ‘Markaz’, the Jama Masjid is a beautifully built mosque with regal white towers rising above. There is a meet of a large number of Muslims every Sunday who come to Jama Masjid after the Maghrib prayers. 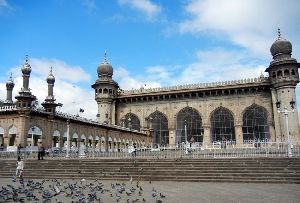