Goa Carnival is the most celebratory time to plan a holiday in Goa. The annual Goa Carnival is one of the most anticipated festivals in the country. Held in the mid of February and March, the festivities are celebrated for three days. Colorful ceremonies, lively processions, foot tapping music and exotic dance performances are some of the main elements of this carnival that draws travelers from all over the world. 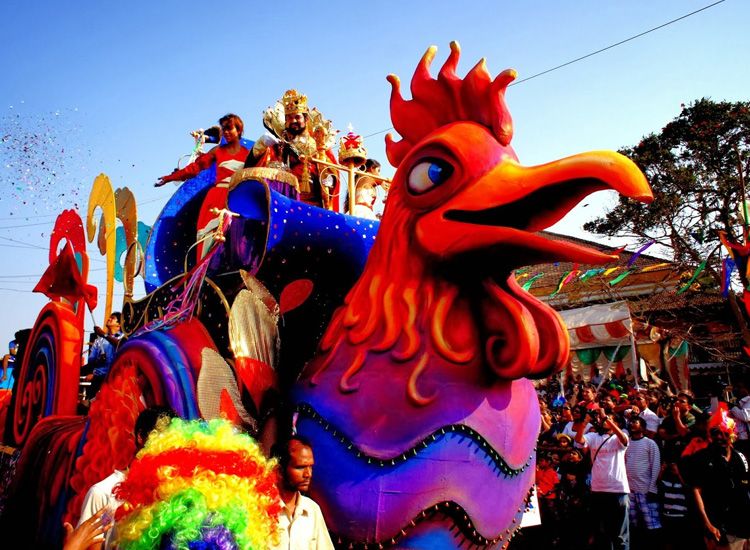 The origin of Goa Carnival goes back to the times of the Portuguese, who paved the way for this festival in Goa, more than 500 years ago. The origin and nature of the carnival can be traced to the extravagant feasts of ancient Rome and Greece. Later the merry-making was modified and started in the Spanish and Portuguese colonies, and became popular for their singing, dancing and drinking.
The term Carnival means ‘to take away meat’. The merry making was an occasion of 3-day celebrations before people began the period of Lent where they would not consume meet for 40 days. The festivities gets concluded on Shrove Tuesday (Fat Tuesday)-the eve of Ash Wednesday, which is the first day of the season of Lent. Also called as Intruz, the celebration of the carnival is held at Lautolim, a small town in Salcette Taluka of South Goa. Though it began as a Christian celebration, but today the festival is celebrated by all Goans, Hindus and western influences as well.

During the annual Goa Carnival, people are dressed in their most striking getup. The person portraying himself as King Momo, also known as King of Chaos, presides over the whole event. People dressed in combat uniform wage a showcased war. The highlight of the festival are the various themed tableaus.

Celebrated with great grandeur, the carnival celebration is managed by the Catholic Church and involves a mass gathering and religious artifacts are paraded. Huge impersonations with live performances of bands and dances all night long on the streets of the state capital, is not an unusual sight during this festival. The parade is hosted by Panaji, while every town hold their own parades. The parade starts at Panaji and further in Margao, Mapusa and Vasco.

There is Fat Fat Saturday Dine and Dance that happens in Varca in South Goa and is one of the most spectacular event.
The festival starts with a spectacular display of colourful floats, followed by dancing performers, people dressed in dazzling costumes, sizable parades and even prize is awarded to the best float. The famous red-and-black dance held at the Club National in Panaji, marks the end of the celebrations.

The Goa Carnival is a unique festival as it is not celebrated in any other part of the country. Be a part of this three day festivity and craze and enjoy an impressive escape from the mundane routine.