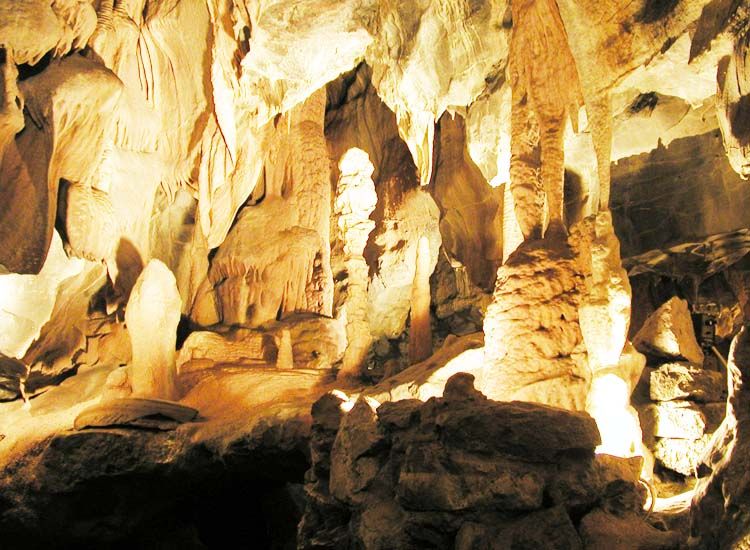 Numerous tourists visit Meghalaya to revel in its scenic beauty and unveil the mysteries associated with the umpteen caves present here. Adding to the list of the majestic caves, Meghalaya has a new entry called as the ‘Golden Cave’.

The alluring Jaintia, Khasi, and Garo Hills already boast of some of the popular caves like Krem Puri, Krem Liat Prah, Siju, Krem Mawsmai, Krem Kotsati and Krem Mawjymbuin. But now, a new cave has been discovered in a village of Jalaphet. The word ‘Krem’ means cave in the local Khasi language. The newly found cave awaits to be promoted as a tourist destination.

The word Meghalaya means the ‘abode of clouds’ and hence the place exudes a matchless charm. Dotted with several lakes, imposing hills, scenic waterfalls and verdant forests, the state captivates the attention of nature lovers. Pitch dark caves are an added plus and offer enthralling caving experience to the travelers. Adventure fanatics in search of something special can satiate their hunt at the caves of Meghalaya.

The word Meghalaya means the ‘abode of clouds’ and hence the place exudes a matchless charm. Dotted with several lakes, imposing hills, scenic waterfalls and verdant forests, the state captivates the attention of nature lovers. Pitch dark caves are an added plus and offer enthralling caving experience to the travelers. Adventure fanatics in search of something special can satiate their hunt at the caves of Meghalaya.

Stones within the cave complex are golden in color and hence the villagers have named it as the ‘Golden Cave or the Krem Ksiar.

In an interview, Womly Chyrmang, the headman of Jalaphet (Bri-Sutnga) told that they were unaware of the presence of some more caves in the village. The discovery was brought into the notice of the elders and villagers by some local fishermen who went to the areas in close proximity to the caves.

He further added that the two villages are planning to meet and approach the tourism department in order to propose the idea of developing the caves as a tourist destination.

Chyrmang mentioned that subsequent to the ban on coal mining in the area by the National Green Tribunal, a fair share of natives of the villages have become unemployed. He said that they not only want to boost tourism in the area but also create employment opportunities for the natives and especially for the youths.

According to him, the cave is beautiful indeed and looks as if it is lit-up with gold. Tourists will be surely fascinated towards the cave.

Damechwa Sytri, Hynniewtrep National Youth Front (HNYF) general secretary, Jalaphet circle, has welcomed the experts to explore the cave. He said that there are numerous students pursuing studies in tourism and will be winding up with the courses in a year or two. According to him, if the Government gives them an opportunity, many of them can become officers in the tourism department. As of now, many youths are working outside and if bestowed with an opportunity, they are ready to work here.

A young boy from the village, Serial Syrti told that upon hearing a bird chirping, he first discovered about the cave. He along with his friends ventured into the cave and were astounded at their discovery. Thereafter, they gathered another set of friends and returned to the cave. This time they decided to go till the extreme ends in search of water. But, to their surprise, the cave didn’t end there.

The three caves are managed by the villagers till now. It is expected that the support from the government through the department of tourism will boost the cave tourism in India.