Located at the confluence point of the river of Narmada and Kaveri, Omkareshwar is one of the most well-known pilgrimage centers in the state of Madhya Pradesh. One of the 12 Jyotirlinga shrines dedicated to the Lord Shiva, Omkareshwar is placed on the islands of Mandhata in river Narmada. The shape of this island looks like the holiest Hindu symbol of ‘Om’. This popular temple town every year attracts an amazing number an amazing number of devotees, who are followers of Lord Shiva. You can also visit Omkareshwar from Mumbai and from Pune during weekend in search of inner peace. This town is dotted with a number of temples. The atmosphere is absolutely serene and tranquil. A visit to Omkareshwar along with the loved ones would be a memorable one.

How to Reach Omkareshwar

Hiring a taxi or renting a cab from Mumbai to Omkareshwar would also be a suitable one. The other option is to go for state- owned bus or private luxury buses.

Located at a distance of 91km away from Omkareshwar, Chhanera railway station receives train from Pune. Once at this railway station, you can hire a taxi to the city center.

If you wish to travel by road to Omkareshwar from Pune, you can rent a cab. Another way is to board state- owned buses or a private tourist bus. 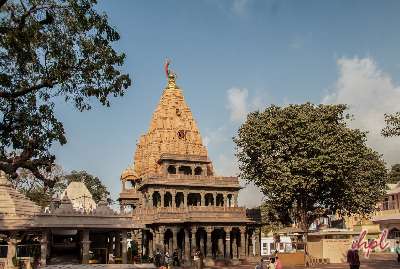 Omkareshwar temple is one of the 12 Jyotirlingas that are dedicated to Lord Shiva, which are sprinkled all around the country. This temple is flocked by a large number of devotees. One of the major religious pilgrimage centers, this temple is placed on Mandhata Island. This temple is built in Nagara- style architecture with enchanting frescos and carvings. It is believed that the Shiva Linga in this temple is Swayambhoo. The temple complex also has shrines of Maa Annapoorna and Lord Ganesha.

Devoted to Lord Shiva, Siddhant Barahdwari Siddheshwar temple is built in impressive Brahmin architecture. Placed on a plateau, this temple was declared a protected temple during the British rule by Lord Curzon. The temple is brilliantly decorated with mural art paintings, intricate figures as well as special elephant carvings in different postures on the walls of the temple.

The Kedareshwar Temple is the most important religious shrine in the Madhya Pradesh station. Erected way back during the 11th century, this temple is visited by tourists as well as devotees in large number. Devotees offer prayer to the Lord to bestow good luck and good fortune on them. Spend some quiet moments here to seek inner peace.

Sri Govinda Bhagavatpaada Cave, associated with Sage Sankaracharya is popular as a legendary cave. It is believed that it is in this cave, that Sankaracharya met another great sage Govind Bhagwatpad and took Diksha (spiritual education) from him. The cave also consists of hall as well as a small sanctum along with a Shivalinga that have brilliantly carved pillars.

Also known as Amreshwar temple, Mamleshwar Jyotirlinga is a striking architecture with amazing stone work. Since 1795 from the time of Maharani Ahilyabai Holkar, 22 Brahmins who are paid by the Holkars, performed Lingarchan Puja. During the 20th century, these Brahmins were reduced to 11. The walls of the temple have inscriptions of Mahims Stotra, dating back to 1063 AD.

Shri Gajanan Maharaj Mandir is another popular temple in Omkareshwar, which is a must-visit. This beautiful temple is fully made up of Dholpuri stones as well as marble. This temple is dedicated to Lord Ganesha.