Weekend Getaway from Delhi to Neemrana

Nuzzled in the Aravalli ranges, located in the Alwar district, that is the north-eastern part of Rajasthan, Neemrana is a beautiful historical town, popular for its forts and other attractions. Lying in close vicinity of Delhi, it is a sought-after weekend getaway destination, perfect for a memorable vacation with the loved ones. Neemrana Fort is the most popular tourist attraction here, which has been turned into a heritage hotel. The region where Neemrana is located is also known as ‘Raath region’, mainly because of its dry sand. Because of its rustic feel and calm ambiance, Neemrana becomes the perfect weekend getaway from Delhi. This town is placed on the Delhi-Jaipur highway in the Behror tehsil, which was under the rule of the Chauhan dynasty till independence. From the past few years, it has also developed as an industrial hub, housing both national as well as international companies.

How to Reach Neemrana from Delhi

The Neemrana town is located on the Delhi-Jaipur highway. Every direct bus from Delhi to Jaipur, will cross. Please take note that Neerana does not have its own bus stand, the closest one is 3 km away in Kosli, therefore, it's best that you hire a taxi or a car. 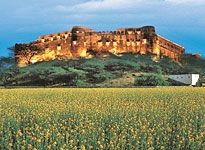 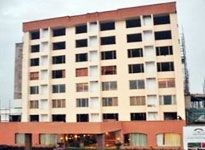 Neemrana Fort : Erected in 1464 AD, Neemrana fort is a magnificent fort, which was turned into a heritage hotel in the year 1986. A beautiful fort, it is one of the most sought-after heritage hotels in Rajasthan, which is quite popular amongst tourists. Placed on an elevated hillock, this fort offers an amazing view of the surroundings. This 15th century property, spread in 6 acres of lush green land has 12 layers. The 40+ guest rooms and hotel boast of housing every world-class facility. You can also indulge in a number of adventure activities here.

Bala Quila: Located on a steep peak, 300 meters above the sea level, Bala Quila is a massive fort. Although in ruins now but it still carries its old-world charm. This gigantic fort is the symbol of the strength of the ruler.

Siliserh Lake : Located at a distance of 86 km from the town of Neemrana, Siliserh Lake is a well-known and splendid picnic spot. This reservoir was founded by Maharaja Vinay Singh in the year 1844 so that water could be provided to the people Alwar. He named this lake after his beloved wife Seela. The lake is spread in 10.5 km of an area and offers a nice view of the Siliserh Palace.