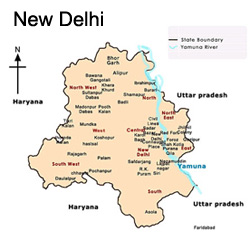 The idea of National Capital Region was to develop a metropolitan area around Delhi so as to divert increasing pressure of population from the region. The concept majorly focused on protecting Delhi’s infrastructure from the disproportionate pressure and to carry a planned development of the region.

The major parts of NCR include Delhi, Gurgaon and Noida. NCR is the India's largest and world's second largest agglomeration with a population of 22,157,000.

Delhi has been continuously colonized since the 6th century BC. Turning on the pages of history, you come to know it has served as a capital for various dynasties and kingdoms. It was captured, ransacked and rebuilt several times. Talking about modern Delhi, it is a cluster of a number of cities spread across its metropolitan region. Delhi is appropriately titled as the City of cities. It is the largest commercial center in northern India. Delhi features a rich cultural and historic heritage, further testified by the large number of monuments dotted across its length and breadth. The major tourist attractions to visit in Delhi include Qutub Minar, Humayun's tomb, Red Fort, India Gate, Lotus Temple, Akshardham Temple and many more.

Noida is a city managed by the New Okhla Industrial Development Authority, it's where it receives its name from. This part of NCR was recognized as Noida on 17 April 1976. The inception of this urbanization thrust was put forward during the Emergency period and was created under the UP Industrial Area Development Act. Located 20 Km southeast of New Delhi, it is a foremost hub for multinational firms outsourcing IT services and the major leader like Sapient, IBM, Abstract Consultancy, TSYS International and many more have their offices in this region. Noida is replete with prime tourist attractions, some of which include the ISKCON temple, the Great Indian Place, Worlds of Wonder, Okhla Bird Sanctuary and more.

Gurgaon, the second largest city in the Indian State of Haryana is also a part of NCR. The part of NCR is located 30 KMS south of New Delhi. It is well connected to Delhi via expressway and Delhi Metro. It is the only Indian city that has successfully distributed electricity connections to each of its households and undergone rapid development in the past 25 years. From a tourism perspective, Gurgaon has a lot to offer, the prime attractions to visit while being in Gurgoan include Shiv Temple, Sheesh Mahal and the Sheetala Devi Temple. Gurgaon also connects to Rajasthan and is only 180 kilometers from Jaipur.