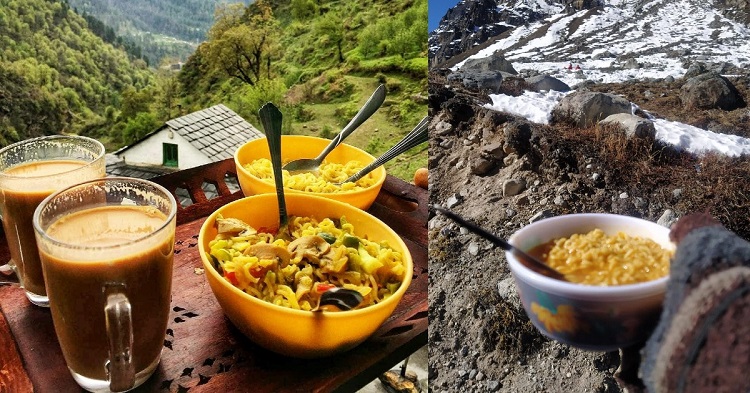 Troop on over the best hill stations near Delhi where the Maggi and tea hits different.

Sipping Tea and slurping soupy Maggi in the hill towns near Delhi is a rewarding feeling. Not only with your sweetheart, but with your other near or dear ones like family, and friends. The combination of these two makes simple experiences come heartily alive.

Shun away your midweek blues by effortlessly uniting Maggi with Tea in the mountains near Delhi. Immerse yourself in the gossip seasons with the heartwarming locals. Gaze down the lofty peaks wrapped in snow.

Let the cold wind brush your face with happiness. Hear the call of the mountains pretty loud and clear. Quench your restless soul to feel and see the mountains while savoring delicious Maggi and Tea at some of the best hill stations near Delhi.

When your hands go numb and the face pales on a cold morning, the tantalizing tea rejuvenates. It has antioxidant properties. You would resonate with us that we Indians feel Chai as our immune booster. But what if we ask you to couple Maggi and Tea on your next mountain weekend getaway near Delhi?

Maggi and Tea have been your soul companion for sleepovers since your childhood days! Ever since then, the hype of savoring these two has been increasing. Nowadays, devouring aromantic Maggi and coupling it with hot-piping Tea amidst the breathtaking Himalayas is the new fantasy for wanderlust souls.

If you also have an appetite to weave the curious relationship between Tea and Maggi on your holidays, satiate your mountain madness with Maggi and Tea at these 5 best hill stations near Delhi. Put on your reading glasses. Your definition of Rishikesh might be restricted to only the ‘rafting capital of India’. Many of us have heard that Rishikesh is synonymous with the ‘Yoga Capital of India’. Whatever you have heard about this adventure-pulling destination in Uttarakhand is true! But how many of you know that apart from waterfall rapping and Ashram hoppings, feasting on soupy Maggi is another best thing to do in Rishikesh? Head to Maggi Point which is snuggled between Laxman Jhula and Shivpuri.

Nothing is better than dropping by here on your Rishikesh holidays if you want to savor different types of Maggi coupled with Kulhaad Chai. If you wish to bask in the real splendor of Rishikesh while savoring noodles and chai, plan your trip in early summers, post-monsoon, and extreme winters. You can club other snacks as well but the combination of Tea and Maggi is toothsome for tourists after riding the rapids of the Ganges.

Distance from Delhi by Road: 480 kilometers/9 hours (approx.)
Best Time to Visit: Throughout the year due to its easy nature.
Nearby Attractions to Explore: Bhagsunath Falls, Namgyal Monastery, Minkiani Pass 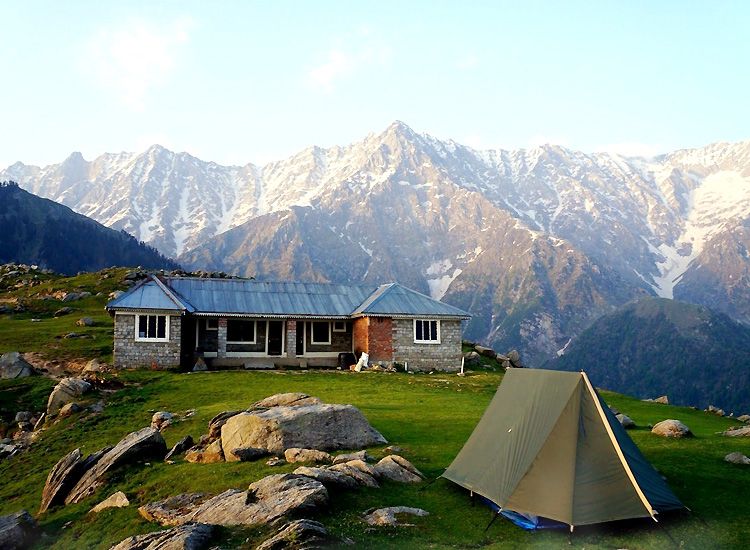 Within the vicinity of Himachal Pradesh lies Triund. Nestled in the Dhauladhar Ranges at an elevation of 9,350 ft (approx.), Triund is the paradise for a newbie or non-experienced trekker. It has mountain flowers, and views of snow-capped peaks that reward wandering hearts with all their glory. The trek to Triund is around 6 kilometers (approx.) which could be covered in a day. Moreover, you can choose to camp at Triund also!

The routes to reach Triund are dotted with tea and snack stalls that serve paranthas also! But if you want to relish different types of Maggi in the hills of Triund, stop by Praveen Tea Stall while embarking on a trek via Dharamkot, also the starting point of Triund Trek.

Note: Triund Trek however remains open in monsoon also but you might not enjoy camping at that time. So, plan accordingly and ask your holiday planner about the same. 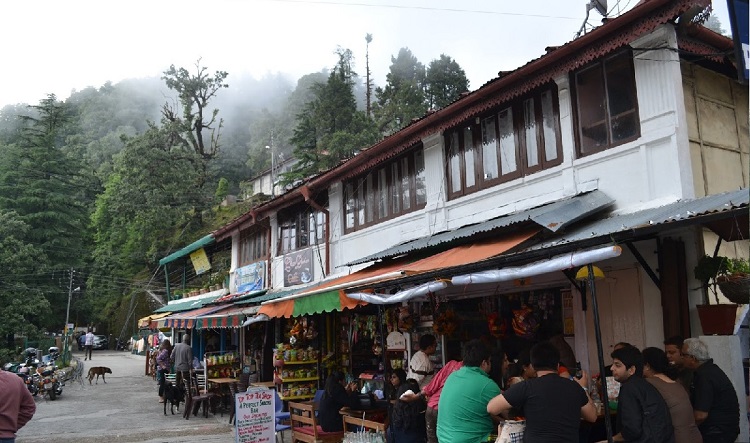 This hill station is located a few kilometers uphill from Mussoorie and has derived its name from the British village. Char Dukan is a famous hot spot for savoring delicious noodles and tea in the vicinity of Landour and near Mussoorie. Char Dukan translates to the four sets of tea stalls that once used to exist here. Score Kulhad Wali Chai to fill yourself up with immeasurable warmth. Furthermore, there are several other tapri’s to satiate your cravings with a mixed range of snacks. If you are in search of less crowded hill stations near Delhi, bookmark Landour, and don’t forget to sip on a warm cup of tea in winters.

Landour in extreme winters from December to January receives snowfall. Couples, family travelers, and backpackers should consider visiting Landour and Char Dukan in winters. To explore the in and around tourist attractions in Landour and Mussoorie. Did we mention Landour is called the Taj Mahal of Mussoorie? So it goes without saying that enjoying soupy noodles here with your sweetheart is an experience to behold! 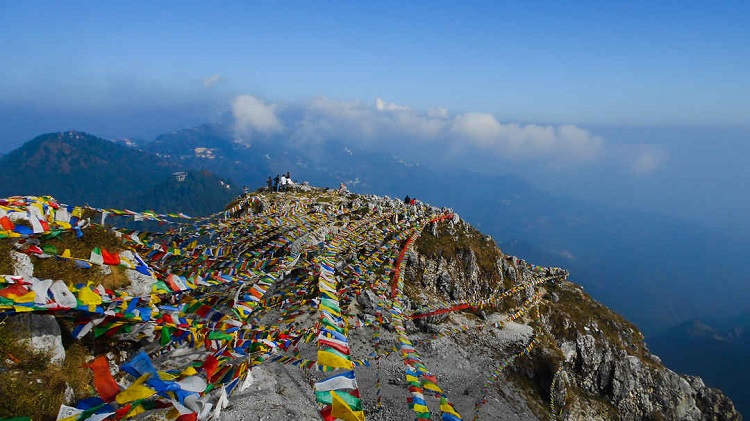 Allow your desi soul to taste the soul satiating adrak wali Chai and Maggi at the Deepika Tea Stall. Drop by the only tapri spot within the vicinity of George Everest Point. The place is a serene getaway as George Everest Point is drenched in lush green meadows.

When you are here, witness goats and sheep grazing around the valley. You would be more amazed to visit this tapri spot in Mussoorie as this place has a house and laboratory of the former Surveyor General of India, Sir George Everest. Do you know that Mount Everest – the earth’s highest mountain above sea level is named after this vantage point in Mussoorie? George Everest Point and Deepika Tea Stall warrant a visit on a short weekend getaway from Delhi. 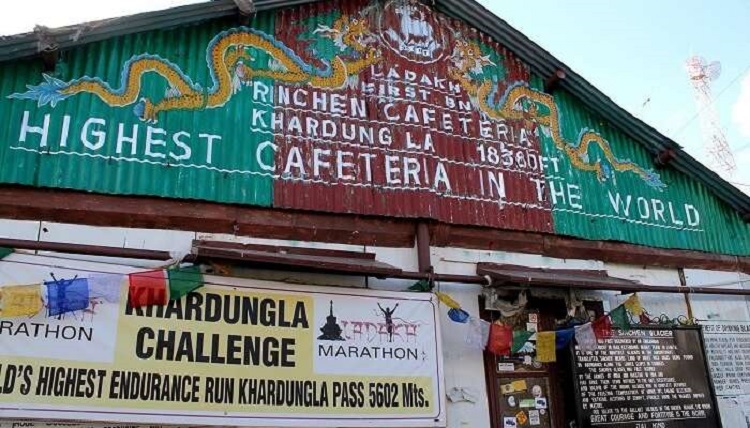 Imagine slurping the Maggi and hot piping Tea at 18,360 feet (approx.) height in Ladakh. This feeling is absolutely rewarding with your near or dear ones. The Rinchen Cafeteria in Ladakh has got the distinction of the highest cafeteria in the world. This amazing tea stall of Ladakh overlooks the snow-capped Himalayan peaks and is a sight to behold. Observe every bit of mountainous beauty of Ladakh while sipping on some piping hot Chai along with Maggi or Momos. The cafeteria sits on Khardung La Pass – a famous mountain pass for motorbiking in India.

The cafeteria is run by the ex – Indian Army Officer who has saved Ladakh from invasion many times during his tenure in the Army. The name of the brave soldier is Col. Chewang Rinchen. Inside the Rinchen Cafeteria, you will get to see lamps, curtains, prayer flags.

Do you have your own favorite Maggi and Tea spot in the mountains or hill stations near Delhi? If not, then make sure you head to any of these places to savor Maggi and tea together.