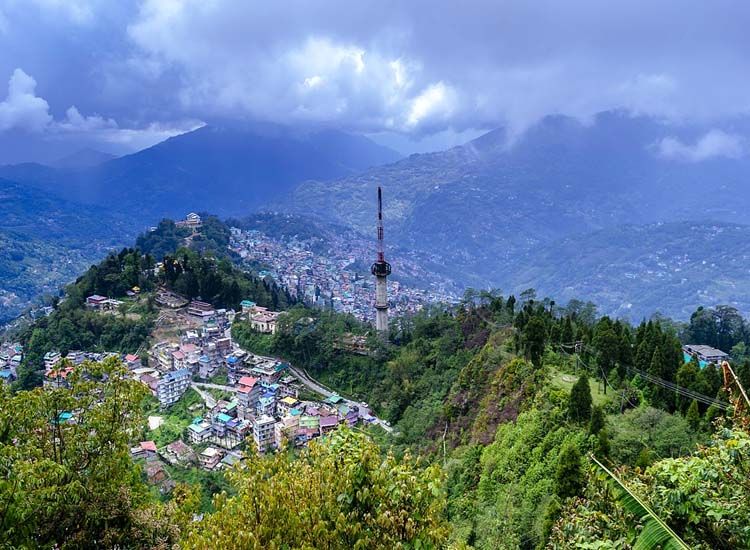 Gangtok, the capital city of Sikkim, is an incredible place to spend holidays. Situated at around 5410 feet in the lower heights of the Himalayan, Gangtok offers heavenly views in abundance. Alpine lakes, streams, rivers, snow-covered peaks, and waterfalls are a few things that the capital offers. Apart from the views, tourists can engage in a wide variety of activities. From families to solo travelers, every person can take a tour of the marvelous city of Sikkim.

Here are 15 things to do in Gangtok – 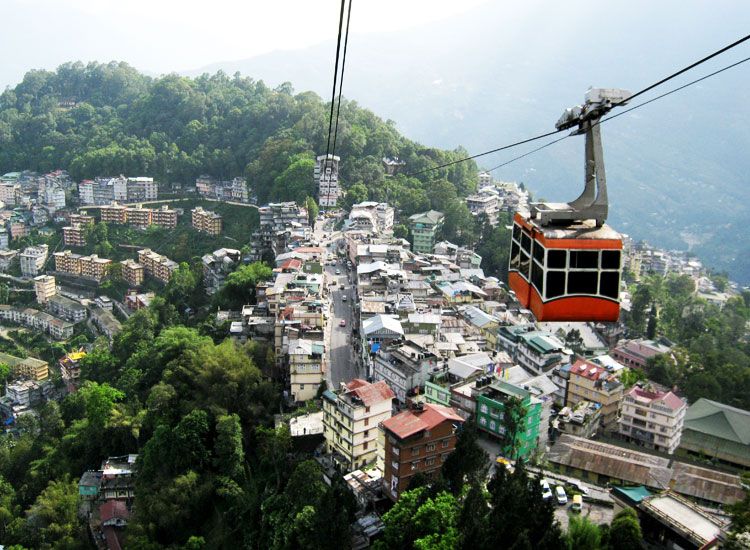 The best activity in the panoramic landscape of Gangtok is taking a cable car ride. The ride begins at the lowest boarding station called Deorali Bazar. Here, you can see the bustle of the city and the beautiful valleys. The next station is Namnang Point where the cable car stops for a break. The riders can take a moment to absorb the tranquility of nature. The last and highest station of the ropeway is Tashiling. The peak of Mt. Kanchenjunga is visible from this point. The views from the top are enchanting. The whole ride lasts about 15 minutes. One cable car holds 6 people maximum.

Note: Prices are subject to change depending on the season. 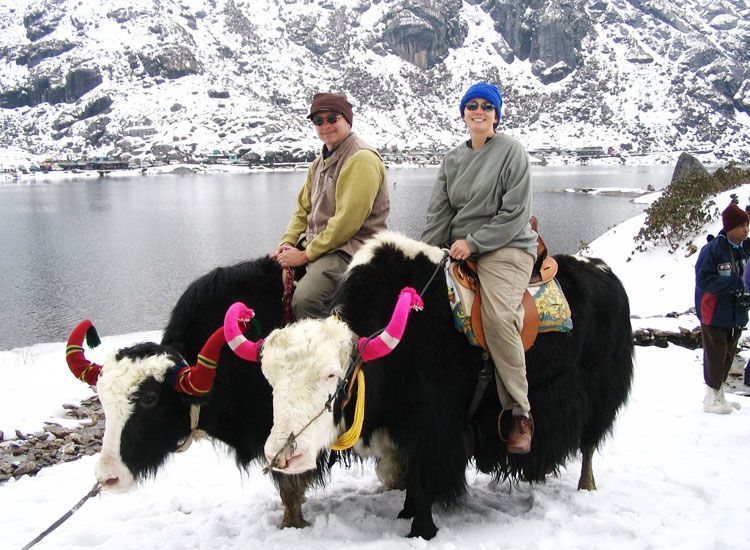 Yak Safari in Gangtok is a unique activity for tourists. Yaks are known as Himalayan Camels as they can carry heavy weights for days without food. The Yak safari is safe for people of all age groups. Tsomgo Lake, also known as Changu Lake, is one of the popular sites for Yak safari. The lake is located 40 km from Gangtok, and at an elevation of 12,313 feet. The best time to enjoy the Yak Safari in Sikkim is during the winters when the lake is frozen. It is said that the lake reflects different colors as the season changes.

Note: Prices are subject to change depending on the season. 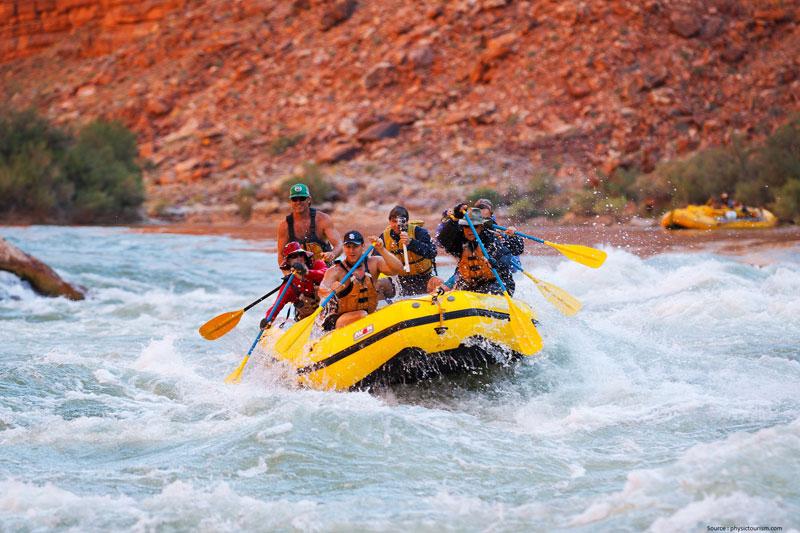 Every adventure lover should try river rafting in Gangtok. The Teesta river rafting is one of the main attractions among thrill-seekers. River rafting at Teesta river is also called White River Rafting because the river creates white foam on the water as it flows down the Eastern Himalayan Trek. Both swimmers and non-swimmers can participate in the sport.

Note: The prices may differ. 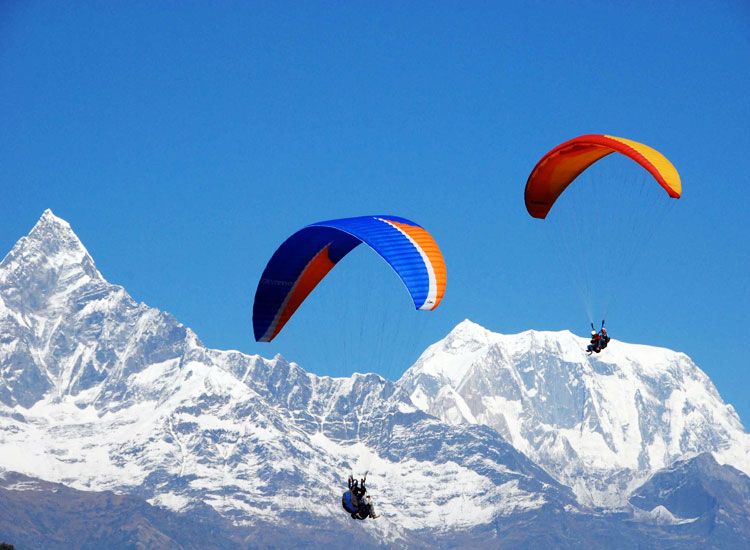 Gangtok is a great place to go paragliding. The bird view from the valleys of Sikkim is breathtaking. Some professional pilots take the tourists on the flight. Paragliding in Gangtok offers two flying options – Medium Fly and High Fly. 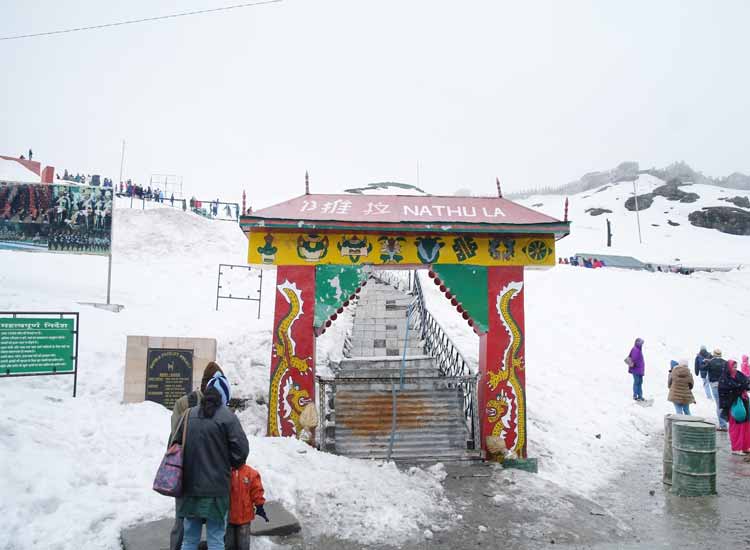 Nathula Pass in Gangtok is a serene place to visit. It is a high-altitude pass on the Indo-China border. Nathula is located on the Old Silk Route that connects Sikkim to China. Since it is an international border, visitors can see huge gates and military bunkers.

There is a Watershed War Memorial and Army Exhibition center for visitors to take a look at the sacrifices and achievements of Indian soldiers. Baba Harbhajan Singh Memorial Temple, Mandakini Waterfalls, Kyongnosla Alpine Sanctuary, and Zuluk Wildlife Sanctuary are some famous spots near Nathula Pass. 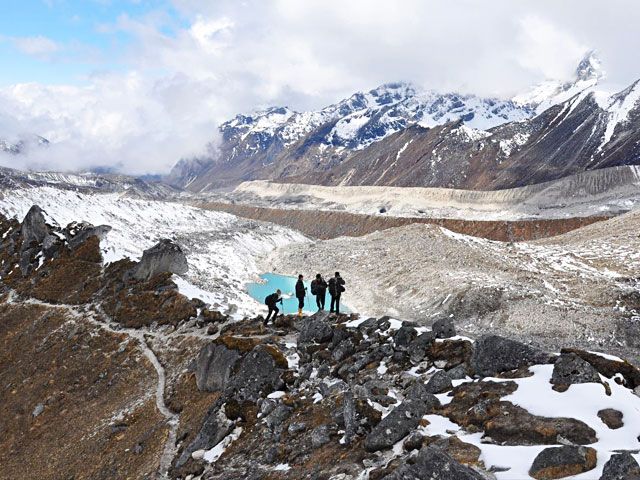 Goecha La is a famous trek in Sikkim. It is known as ‘the’ Trek for Kanchenjunga’ because the trail passes through the Kanchendzonga National Park. The trek begins from Yuksom and ends at Goecha La. Tourists can indulge in the beauty of nature by camping at night. The whole trek is a memorable experience.

Note: The trek at Goecha La is difficult and lengthy. Tour operators organize the trek and provide some of the necessary equipment and permits. Research before you go. 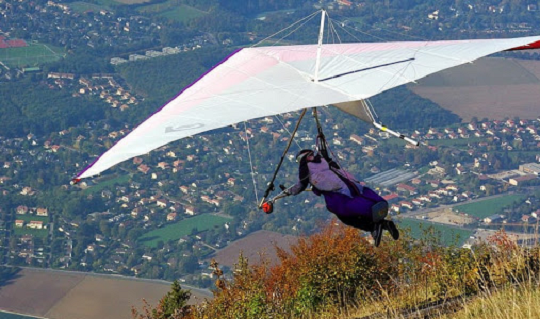 Hang gliding is another thing to do in Gangtok. It is often confused with paragliding. In hang gliding, the pilot navigates in the air by using their weight. First-time fliers can hang glide with a professional pilot while experienced fliers can go solo. Yumthang and Jorethang are two points where hang gliding services are available.

Lal Bazaar is a significant market in Gangtok. It is a place where all the farmers sell their produce. Lal Bazaar is known for its fresh vegetables and fruits. Located below the MG Marg, the marketplace is a hub for bargainers. Tourists can buy a wide variety of items from the market. Traditional dresses, prayer flags, and exquisite pottery are available. Shoppers can also buy superior quality cheese. Alpine cheese and Churpi are made of Yak’s milk. Lal Bazaar allows the tourists to take back a piece of Sikkim’s culture.

Seven Sisters waterfall is located on Gangtok – Lachung Highway. It is 32 km away from Gangtok. There are 7 stages to see the Seven Sisters Waterfall. However, tourists can only see it in 4 falls. Seven Sisters Waterfall leaves the tourists speechless during the monsoons as the surroundings turn lush green. The Tourism Department has installed a shed and a cafeteria to facilitate the tourists with a break. Visit the waterfall to rejuvenate amidst the wonders of nature.

Located at a distance of 8 km from the town of Gangtok, the Tashi viewpoint is an ideal place to watch the peaks of Kanchenjunga and Siniolchu. The best time to look is during sunset and sunrise when the golden sunlight falls on the mountains. Tourists can also spot Phodong and Labrang monasteries from the Tashi viewpoint. You can take a look through binoculars or a telescope by paying a minimal fee of INR 10. 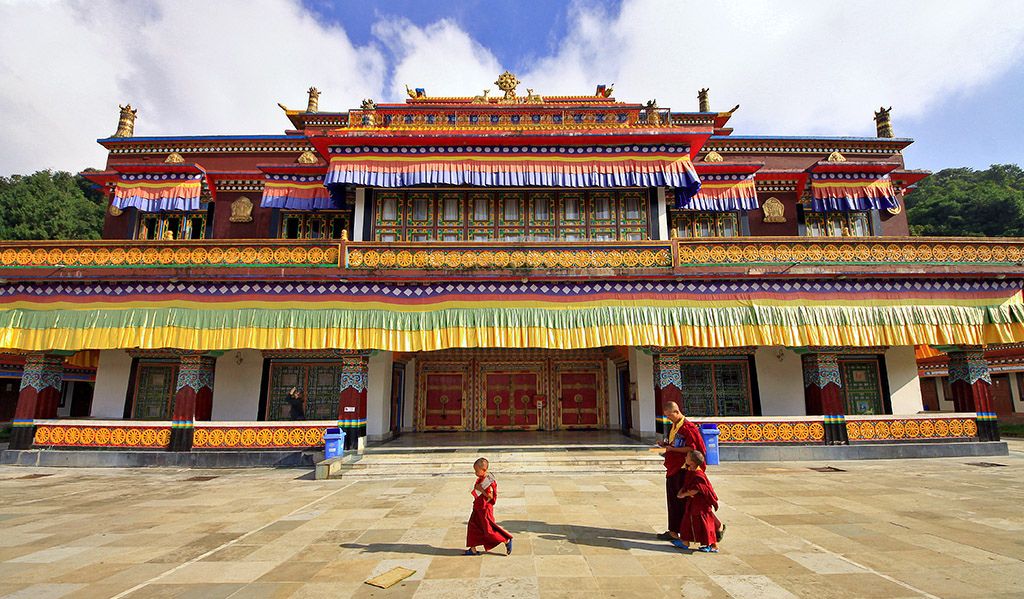 One of the largest monasteries in Gangtok is Rumtek Monastery. It was founded by the 9th Karnmapa Lama Wangchuk Dorje. The 16th century built monastery was earlier called the Dharma Chakra center. It consists of a shrine temple, a golden stupa, and some sculptures of the 16th Karmapa. The architecture is an example of a traditional Tibetan monastery. Tourists can find a 10-foot statue of Sakyamuni Buddha. Rumtek also holds statues Virupaksha, Virudhaka, Dritarashtra, and Vaishravana who are the guardians of the universe in Buddhism.

A quaint town in North Sikkim, Chungthang is about 100 km away from Gangtok. It sits at the confluence of the Lachen and Lachung rivers that form Teesta river in Gangtok. This scenic town is a sacred site for Buddhists as Guru Padmasambhava walked here. The rock with Padmasambhava’s footprint is a popular site among believers. Chungthang is also home to a Sikh Gurdwara called Gurudwara Nanaklama. It is said that Guru Nanak Dev passed through the town on his way to Tibet. Visit the holy town to hear tales and legends associated with the place. 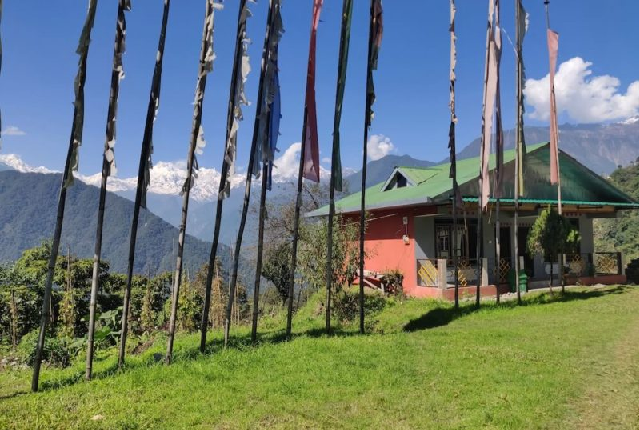 The entry point to Gurudongmar and Yumthang, Mangan is a village in North Sikkim. It is settled at an elevation of 4000 feet above sea level. People stay at Mangan village before proceeding to Lachung and Lachen. The village is laden with bubbling streams and soaring waterfalls. The hamlet is away from the bustle of the city providing solace to nature lovers. The wilderness offers a great opportunity to photographers, bikers, and trekkers. A day trip to Mangan is enough to satiate the hunger for thrill and adventure. 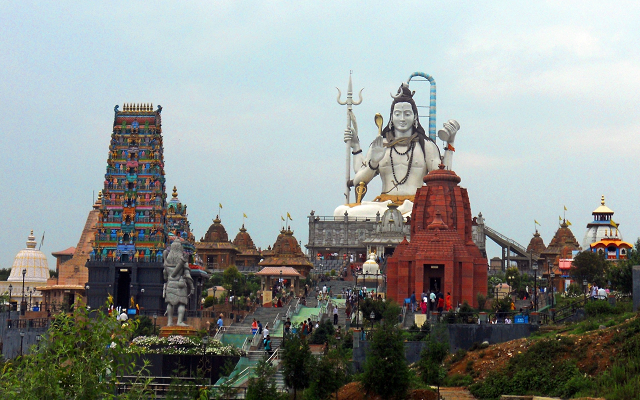 Also known as Namste, Namchi is situated at a height of 5500 feet above sea level. It is the Culture Capital of the state. Namchi is a hospice of religious structures. Tourists can find a replica of Char Dham that has religious significance for Hindus in the country. The capital also holds the biggest statue of Guru Padmasambhava. Tarey Bhir, Namchi Ropeway, Tendong Hill, Rose Garden in Solophok, Sai Mandir are some places to visit in Namchi. Namchi is popular for its flower shows in February and March. 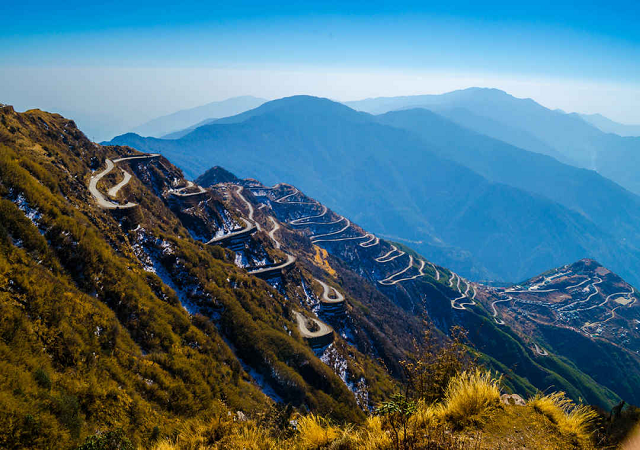 Once a transit point to the Old Silk Route, Zuluk is a little haven in East Sikkim. Zuluk or Dzuluk or Jhuluk is an Indian army base. The town is located at an elevation of 10,100 feet in the lower Himalayas. Thambi Viewpoint, 14 km away from Zuluk, offers mesmerizing views of the Kanchenjunga. The climatic conditions at this offbeat destination can be harsh because of its location. Tourists may spot Himalayan Bears and Red Panda in the wilderness of Zuluk.

Note: A special permit is required to enter Zuluk. Tour operators can take care of the licenses.

A romantic at heart, Mamta is passionate about traveling. Her work reflects her passion and her love for nature. She creates content pieces that fascinate readers and keep them hooked for more. She also loves to binge-watch TV shows when she is not writing.