Weekend Getaway from Bangalore to Madikeri

Formerly known as Mercara, Madikeri is a picturesque hill station that is quite popular for its tea and coffee estates. Acres of lush estates, pollution-free and serene environment, lush green forests, pleasant climate, orange groves, scenic locations, misty hills, undulating landscape and its various tourist attractions, make the hill town of Madikeri the perfect weekend getaway destination from Bangalore. The aroma of Coorg honey, black pepper and cardamom fill your nostril while you indulge in a leisurely walk around the town. You can also indulge in trekking here. The hill town of Madikeri is also the birthplace of the River Cauvery. This hill station was founded by Muddu Raja, the prince of the Haleri dynasty in 1681, so it was named Muddurajakeri and finally Madikeri. One can spend a relaxing vacation here.

How to Reach Madikeri from Bangalore 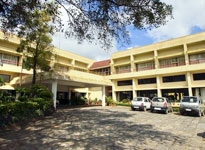 Originally a mud fort, Madikeri Fort was constructed by Muddu Raja in the second half of the 17th century. This fort was later re-built by Tipu Sultan, who named it Jaffarabad. Made of brick and mortar, this fort has been a witness to a number of battles, fought in the region. Later on, the fort came under Doddavira Rajendra and lastly under Lingarajendra Wodeyar II. The complex of the fort consists of a few government offices, a temple, a small museum, a prison and a chapel, wherein all the structures are in ruins.

Located quite close to the hill town of Madikeri, the beautiful site of Abbey falls is a very well-known tourist attraction of the region. Enjoy the site of river Cauveyy cascading down from a height of 70 feet. A hanging bride lies across the gorge so that the visitors can have a nice view of the water falls. Enjoy picnic with your loved ones at the waterfalls, which are accessible after crossing a narrow lane from Madikeri. A visit to these waterfalls can be even more unforgettable.

Located close to the heart of Madikeri, Omkareshwara temple was constructed by king Lingarajendra in 1820. The temple constructed in Gothic and Islamic architectural styles also consists of a tank, placed in the front. The Shiva Linga, placed in the temple, was brought by Lingarajendra from Kashi. He erected this religious site to get riddance form a curse that was spewed- out on him after he had killed a Brahmin.

The beautiful historic structure of the Gaddige Raja’s Tomb has been constructed in the Indo-Sarcenic architectural style. The tomb consists of the worldly remains of the Kodavad royal family and his court’s dignitaries. The tomb of Lingarajendra constructed by his son Chikkaveerarajendra in 1820 AD is one the right side of this tomb and the tomb of Rudrappa, a royal priest made in 1834 on its left side. This tomb is just one km from Madikeri.

Situated on the western end of Madikeri, Raja’s Seat translates to the Seat of the King. This well-maintained garden is just the right place to have some amazing views of the surrounding hills and valleys. The complex also has a small pavilion in its premises. You can have an amazing sunset view from here.

The Tata Tea Estate in Coorg, located at a distance of just 50 km from Madikeri, is a popular tourist attraction. A visit to the lush tea estate is a refreshing one wherein one can treat his eyes to the greenery spread around. This huge estate has a unique bungalow right, in its centre, open for offering accommodation to the visiting tourists. You can also visit the tea factory nearby to view the tea leaves being processed into tea grains.