The first airport of the Himalayan state of Sikkim is a treat for travelers as it provides easy connectivity to discover this unexplored corner of the country. While previously the nearest airport to get to Sikkim was in Bagdogra in West Bengal, which was almost 120km+ journey that needed 5-6 hours, the new airport is just 33km from Gangtok which is only an hour drive. The recent launch has reduced time and hassle for traveling to Sikkim. 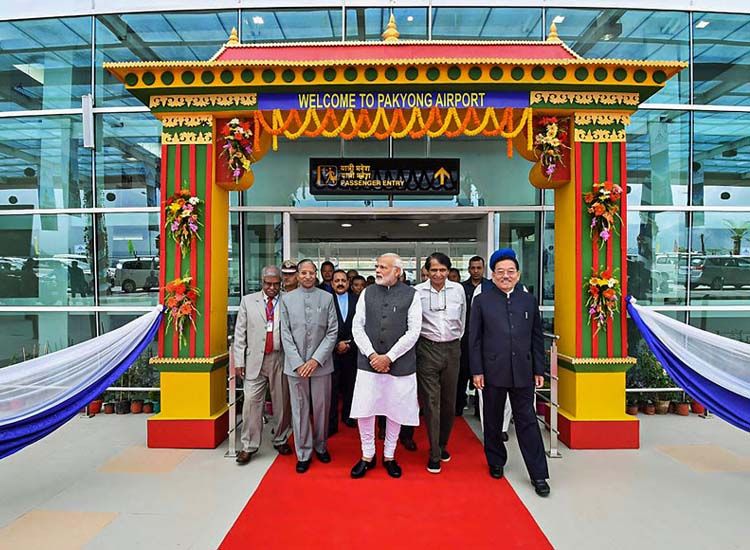 Settled at an altitude of 4500 ft above sea level, the Pakyong Airport lies almost 60km from the Indo-China border. The ‘engineering marvel’ as the airport is being called, was founded in 2009 and has costed around 600 crores INR. Spread over 990 acres, it is the first green field airport in North East India.

As per reports from Sikkim chief secretary A K Srivastava, the airport has a 3,000 sq metre terminal building. It is equipped with integrated structures comprising an ATC tower-cum-fire station, two sophisticated CFT, one terminal building for passengers, high-intensity runway lights, parking for over 50 vehicles and a reinforcement wall that is 80m-high one of the tallest in the world. Also, the airport has a 1.75 km runway with a width of 30 m and has a 116-metre-long taxiway connecting it to the hanger measuring 106 m by 76 m that can simultaneously accommodate two ATR-72 aircraft. The Sikkim police has been entrusted with the security of the Pakyong airport.

As of now, the commercial operations from the airport are provide by Indian airline SpiceJet. Connecting to the airport will be daily flights to and from Delhi, Kolkata and Guwahati. The first commercial flight, 78-seater Bombardier Q400 is all set to operate on October 4, 2018.

Sikkim awaited its own airport since 70 years of Indian Independence. The airport is expected to boost the tourism and economy of the state. Going by the scenic visuals of the airport, travelers will not be able to keep away and will become the gateway to the unexplored North East India.