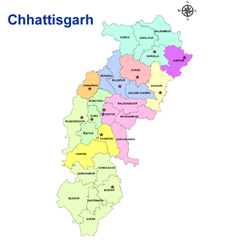 Cities in Chhattisgarh are the true indicators of the heritage and traditions of central India. The musical grandeur and the joy of fairs and festivals are some of the salient traits that describe the cultural beauty of this magnificent tourist destination. Each and every city has its own charm and charisma that keeps attracting hordes of tourists from every nook and corner of the world.

Bastar, home to some indigenous tribes of Chhattisgarh, is one of the important places in Chhattisgarh that is renowned for its natural resources. Wonder and excitement await you as you step into this city owing to its wide and thick forests, meandering streams, sky-touching mountains, caves and high waterfalls.

Bilaspur is also one of the famous cities in Chhattisgarh which is known for its quality of rice. Bilaspur's cultural legacy has earned it respect. The Kosa industry thrives in Bilaspur. It has two of the major tourist districts that are namely: Ratanpur and Mallhar. Ratanpur is basically a religious tourist place that is famous for the old sculptures and temples. Mallhar is also well-known as a tourist destination for housing ancient temples and sculptures.

A tour to Chhattisgarh and to important cities in Chhattisgarh is surely going to add the excitement and all new wonders in the life of a tourist.