The Vivekananda Museum in Chennai is also known as the Illam. It is one of the most celebrated Museums in Tamil Nadu that upholds the rich heritage of Indian Culture. This Museum in Chennai has a plethora of unique and exquisite elements that act as an additive to its preexisting glory.

Previously, the Vivekananda Museum used to be the storehouse of Ice that was brought from North India. It is a general belief that at Ice House Ice did not melt for a long time. The Ice Business flourished quite well in that area but in course of time, the Vivekananda found that the place would be an ideal abode for relics and antique pieces.

Henceforth the building was confiscated by the Vivekananda and ultimately it became one of the most significant Museums in Chennai. Numerous Musical Instruments are on display here. They range from ancient to modern instruments. There is another important event related to the Ice House in Chennai. It is said that Swami Vivekananda delivered his lectures in the Ice House and inspired numerous people who eventually renounced absolutism and started following an ascetic path in life.

The teachings of the Vedanta, Philosophy and Upanishads are well preserved in some of the rare manuscripts housed in the Vivekananda Museum, Chennai. Vivekananda still acts an illuminating personality whose photographs and memoirs are kept with care and concern in the museum.

The Vivekananda Museum in Tamil Nadu is open every day except on Wednesdays and the timing are 10 am to 12 pm and 3 pm to 7pm. The Vivekananda Illam is located off the Marina Beach between Tiruvallikani and Lighthouse Train Stations. It is situated in the Kamarajr Salai at South Beach Road. 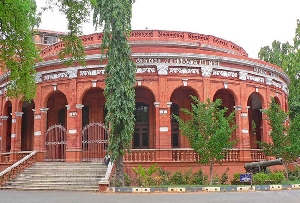 
Sightseeing and Things To Do in Chennai