Lying at the southernmost tip of India, Kanyakumari is one of the most revered pilgrimage sites which is being thrived by the devotees throughout the year. It is located at the confluence of the Arabian Sea, the Indian Ocean, and the Bay of Bengal. Often referred to as the 'Land's End' of India, Kanyakumari or Cape Comorin is famous for its picturesque beach and spectacular sunrises and sunsets. On "Chaitra Purnima" (the Tamil name for all full moon days that generally fall in April), it is possible to enjoy the unique experience of seeing the sunset and the moon rise over the ocean simultaneously.

The sea at Kanyakumari is pretty rough, so it is an enjoyable sight, watching the sea beat itself against the rocks and then subside before it gathers itself up for another attack. The Kanyakumari beach is beautifully hued with multi-colored sand, but it does not generally offer one the opportunities to sunbathe on the soft silver sands, or to indulge in some frolicking in the waves! This is largely due to the fact that the seashore is rocky and dangerous, and there is a manmade wall running along with it. People are warned to stay off the rocks, and if someone does otherwise, he or she is severely reprimanded by a watchful policeman. A spectrum of shells is available on the Kanyakumari beach. There is a lighthouse that offers a panoramic view all around.

Blessed with incredibly dramatic settings, Kanyakumari Beach is one of the most pristine beaches of India. Beauty oozes here in the form of soft golden sand that is overlapped by shimmering waters of the endless sea. It is among the famous tourist spots where visitors can relax and rejuvenate amidst the serene environs. Kanyakumari Beach is known for its turbulent tides and opulent exquisiteness. It is not a place for swimming and surfing as the sea is rough here. Kanyakumari Beach is a perfect place to delight in the surreal sunset and sunrise views. It is a paradise for nature lovers and shutterbugs.

There is folklore, according to which, Goddess Kumari the young and unmarried incarnation of Goddess Parvati did a tough penance for Lord Shiva to get him as her consort. She stood upon the last rock of the beach, which is now known as Vivekananda Rock. Even though, after getting success in her penance, Lord Shiva holds the marriage as she requires to kill the demon in her unmarried avatar. She obliges that prophecy but gets furious and enraged at the disgrace; she vows to remain a 'kumari' or unmarried for the rest of her life. Her wedding arrangements all turned into conches and seashells, and the remaining turmeric and vermillion were left behind to paint the sands of Kanyakumari in various shades.

How to Reach Kanyakumari Beach

Situated in Kanyakumari, this beach is well-connected with the major cities and towns of the country. Kanyakumari is a popular tourist place and of the most celebrated pilgrim center. The nearest airport at Thiruvananthapuram is 87 km away. Kanyakumari is spirally connected with all places by rail and road. The city has its own railway station and major bus stand from where tourists can travel into the city. Here is the detailed information about how to reach Kanyakumari Beach:

The best time to visit Kanyakumari Beach is in the winter season from October to February when the region experiences pleasant and calming climatic conditions. This is the peak season to visit the beach as the weather remains comfortable for outdoor activities. There are no adventure sports that take place here, however, tourists can spend quality time here and enjoy the bliss of the tranquil tourist destination. During the summer season, this place experiences hot and humid climatic conditions, which makes sightseeing and outdoor activities uncomfortable. The magnificence of this beach can be best relished in winters when the climate remains enjoyable. The breathtaking sunset and sunrise views overlooking the oceans make the trip memorable.

Bordered on the west, south, and east by the Laccadive Sea, Kanyakumari has a coastline of 71 km stretch on the three sides. This beach is an amazing getaway from the hustle bustle of city life and to spend some blissful moments in peace. It is a perfect place to relish the alluring sights of the ferocious tides hitting the rocks at the shore. The Thiruvalluvar Statue and Vivekananda Rock were constructed in the sea at the Kanyakumari Beach.

The major highlight of the Kanyakumari beach is The Sangam, which is the meeting point of the three major water bodies - the Bay of Bengal, the Arabian Sea, and the Indian Ocean. It is a bathing Ghat, with steps leading into the water and a sort of lagoon formed between lands by a series of rocks. Another popular attraction of the Kanyakumari Beach is Vivekananda's Rock. A major structure at Kanyakumari is Vivekananda's rock, a huge stone rising out of the sea, on which Swami Vivekananda is said to have meditated. It now houses the statue of Vivekananda and is a memorial to him.

Places to visit near Kanyakumari Beach

Kanyakumari is blessed with numerous tourist places. It is a popular spiritual center, where devotees visit to seek blessings from Goddess Parvati. There are numerous temples and other attractions that are thronged by the victors throughout the year. There are a plethora of places near Kanyakumari Beach which can be explored during the Kanyakumari trip. Some of the popular destinations near the beach are:

Places to Stay near Kanyakumari Beach 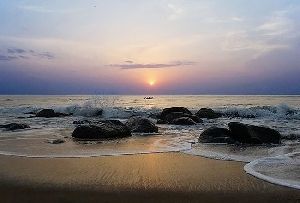 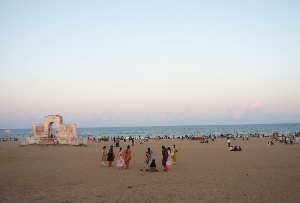 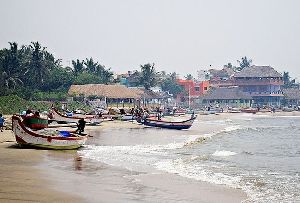 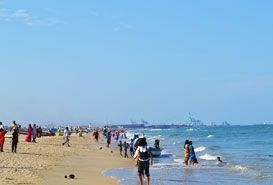 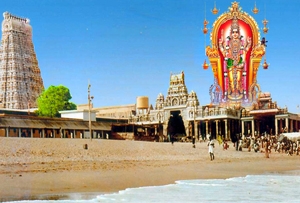 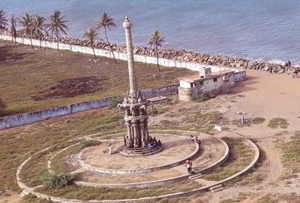