The cuisine of Gujarat is in many ways unique from other culinary traditions to be found in India. In keeping with the Indian trend however, most people of Gujarat are vegetarian and so are the most popular Gujarati delicacies. This large scale vegetarianism originally sprung from religious ideologies and beliefs of the region.

Cuisine of Gujarat in India is a blend of exquisite flavors and textures; traditionally served in a silver platter, the Gujarati thali comprises of rice, chapattis, dal, vegetable curry, saag, pickles. A wide range of foods are cooked in Gujarati households, and the body of gastronomical delights that we identify as Gujarati cuisine, is an assortment of different recipes originating in different parts of Gujarat.

However, a few ingredients are more commonly to be found. Ghee (purified buttermilk), sugar, coriander, gram flour, rotis made of bajra, maize, methi, chat masala, etc. are common ingredients of cuisine of Gujarat.

Staples of Gujarati cuisine include salad, homemade pickles, Khichdi (rice and lentil or rice and mung daal cooked together), and chhaas (buttermilk). Main Gujarati dishes are based on steamed vegetables and dals that are added to a vaghaar, which is a mixture of spices sautéed in hot oil that is added to enhance the digestive qualities and taste of the main ingredient.

The climate and vegetation of a place largely in all cultures influence the cuisine of that region. The dry hot climate of Gujarat has considerable influence on the cuisine of Gujarat as well. Salt, sugar, lemon, lime, and tomato are used frequently to prevent dehydration in an area where temperatures shoot up to 50C (120F) under the shade. It is common to add a little sugar or jaggery to some of the sabzi/shaak and daal which is believed to neutralize the slightly salty taste of the water.

Moreover, the dry Gujarati climate does not sustain the cultivation of rice. So rice is not so important a part of the Gujarati as it is in Bengal or Orissa say. Chapattis made of wheat flour, gram flour, bajra, maize are made at home.

Sweets and chaats are another most important feature of a proper full course Gujarati meal. Gajar ka halwa, besan halwa, sweet stuffed ghari-puri, malpwa, laddoos, among the sweet dishes and papdi chaat, kachori chaat, samosa chaat, raj kachori chaat, dhokla, are some of the most popular of Gujarati snacks that have now become quite a rage specially, among youngsters all over the country. 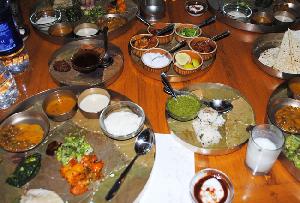 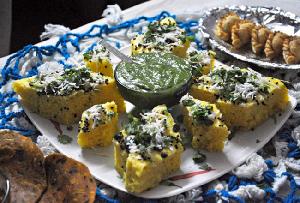