Ram Raja Temple Of the many interesting temples in Orchha, the Ram Raja Temple is an important tourist attraction. There is a fascinating tale behind the history of the Ram Raja Temple. This temple was at one point of time, a palace of the then ruler Madhukar Shah. Legend says that once Lord Rama appeared in his dreams due to which Madhukar Shah brought the idol of Lord Rama into the palace before installing it inside the temple. But for some reason the idol could not be moved from its original place in the palace. The ruler then remembered the bit of his dream where it was said that the idol would stay at the place it would be kept initially. It was then that the king turned the palace into a temple.

The temple was originally a palace. So the traditional temple architecture and style is not seen in the Ram Raja Temple, Orchha.

How to reach Ram Raja Temple :

Ram Raja Temple can be easily reached from Orchha in Madhya Pradesh, in any kind of local transport. Orchha is situated in the northern end of Madhya Pradesh, the central most state in India. The closest airport is Gwalior(120 kms) while Jhansi is the closest railway station (16 km). Orchha lies on the Jhansi-Khajuraho road. 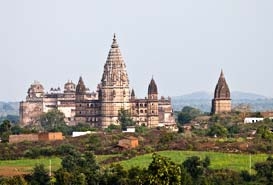