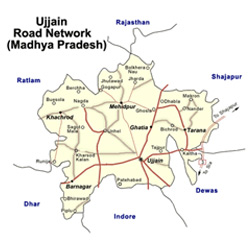 Madhya Pradesh is located in the center of India for which it is known as the heart of India. Madhya Pradesh showcases different and distinct culture having different languages in all the cities in Madhya Pradesh. Bhopal is the capital of Madhya Pradesh which is a fusion of the old and the new. Other important cities include, Gwalior, Orchha, Khajuraho, Omkareshwar, Chitrakoot, Mandu, Jabalpur, Sanchi, Kanha, Ujjain, Panchmarhi and Amarkantak.

Madhya Pradesh is one of the most sought after destinations for travelers. Major attractions include Kandariya Mahadev Temple, Bade Ganeshji ka mandir gwalior fort, Mahakaleshwar Temple and many more.

The exquisite images of Khajuraho are situated in the central Indian state of Madhya Pradesh. Khajuraho is an astonishing gift of love to the world. Beautifully carved structures depict every aspect of human life. For this reason this wonderful city in Madhya Pradesh is a must in the tour itinerary of every travelers.

Bhopal, the capital city of the largest state in India, Madhya Pradesh, is also fondly known as the City of Lakes because of the two stunning lakes that are situated in the center of the city. The other attractive cities in Madhya Pradesh, India which should not be missed are Orchha, Panchmarhi, Gwalior and Sanchi. Sanchi is very famous for its stupas. Orchha is heritage site with fascinating forts and palaces. Panchmarhi is a beautiful hill station while Gwalior is very famous for its forts and other monuments.

List of Top Tourist Places to visit in Madhya Pradesh