Home to several Gods and Goddesses, India offers a heavenly experience. Thus, the quest for the divine urges devotees to embark on a pilgrimage. The Chota Char Dham in Uttarakhand is no exception. Paving the way to salvation or Moksha, the holy sojourn enjoys great religious significance. Besides washing away all the sins, the Chardham Yatra takes you to the four sacred shrines, namely Yamunotri, Gangotri, Kedarnath, and Badrinath. Char Dham Yatra starts on 3rd May 2023, and the booking of the Char Dham tour packages is open. Indian Holiday will help you plan a customized Chardham tour according to your requirements. 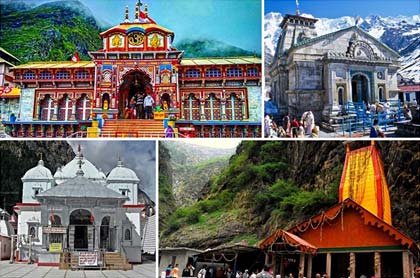 The Chota Char Dham Yatra starts from Akshaya Tritiya in May and usually ends in October/November two days after Diwali. But the best time to visit the Char Dham Yatra is from May-June and September-October. Owing to heavy snowfall in winter and extreme rainfall in monsoon, it is difficult to complete the journey during these seasons. For Hindu devotees, traveling to these temples in India is considered auspicious and mandatory at least once in a lifetime. There are three major sects in Hinduism - Shaivism, Vaishnavism, and Shaktism. The Char Dham of India consists of three Vaishnava locations (Dwarka, Badrinath, and Puri, Rameshwaram).

The first landmark of the holy trek to Yamunotri Dham. A blissful abode of Goddess Yamuna, the shrine marks the origin point of the river. Nestled at a high altitude, Yamunotri temple remains open from May till October/November 2023, and the temple visiting time is 6 am – 8 pm. However, Yamunotri temple aarti's timings are 6:30 pm and 7:30 pm. The journey to Yamunotri starts from Janki Chatti, and during winters, the idol is shifted to Shani Dev Temple in Kharsali. Pilgrims can plan Ek Dham Yatra by paying homage at this shrine.

A holy seat of river Ganga, Gangotri is the second Dham en route the trek. Every year innumerable pilgrims embark on Gangotri Dham Yatra to seek the blessing of the goddess. Located near Gaumukh –originating point of the sacred river, the temple dates back to the 18th century. Gangotri temple doors are open in May and closed in October/November. Thereafter, Mukhimath Temple in Mukba becomes the winter seat of the goddess.

Enshrining one of the twelve Jyotirlingas of Lord Shiva, Kedarnath Temple is surrounded by awe-inspiring snow-covered mountains. Kedarnath Yatra starts from May till October/November. Temple visiting timing 4 am – 9 pm. Adi Shankaracharya, the founder of the Char Dham Yatra in India, attained salvation at Kedarnath only. Cradled between the Nar and Narayan peaks in the Rudraprayag district, the Kedarnath temple remains closed for six months a year. The idol then gets transferred to the Omkareshwar Temple in Ukhimath. The stunning scenery of the Mandakini River along the way keeps the spirits high! Along with Badrinath Dham, the sacred site completes the Do Dham Yatra.

Dedicated to Lord Vishnu, the Badrinath Dham is an important site. Badrinath Yatra starts from May to October/November 2023, and temple visiting timing is 4 am – 9 pm usually. Besides being a part of a relatively smaller circuit of Hindu pilgrimage, the shrine is also included in the Char Dham Yatra. Adorning the Chamoli district, the shrine houses the idol of Lord Badrinarayan in a meditative posture. The idol is worshiped at Vasu Dev Temple in Joshimath for the whole winter season. Together with Kedarnath Temple and any one of the Gangotri or Yamunotri, the shrine completes the Teen Dham Yatra.

Reaching Char Dham Uttarakhand is a challenging expedition in itself. Luckily, Gangotri and Badrinath are easily accessible by vehicles. However, Kedarnath and Yamunotri command arduous trekking. For those, unable to undertake the enthralling trek can fly to Char Dham by helicopter. A multitude of camps, budget and luxury hotels, homestays and guest houses offer comfortable accommodation en route to Char Dhams in Uttarakhand. Overall, the Chota Dham Yatra in the Garhwal hills offers a blissful retreat.

Char Dham Yatra holds immense importance among the Hindu pilgrims. The pilgrimage sites are snuggled in the lap of the great Himalayas, and due to the remote locations of these shrines, they are inaccessible during the winter season for over a span of 6 months. These four pilgrimage sites are open for the devotees for a brief six months, which commences from the month of April and May. Yamunotri and Gangotri Temple open on the day of Akshaya Tritiya every year, while Kedarnath and Badrinath temples open a few days after them. The opening date of Kedarnath Temple will be announced on Shivaratri and for Badrinath Temple, it will be announced on Basant Panchmi.

The Char Dham Yatra is one of the most revered pilgrimage circuits in India. It is believed that if someone undertakes this journey once in a lifetime then that person attains salvation. The Chardham is snuggled in the lap of the Himalayas in the state of Uttarakhand. You can choose to start the Yatra from Haridwar, Rishikesh, and Dehradun according to your convenience. The Char Dham Yatra begins with the visit of Yamunotri Dham after a 36 km drive from the Barakot followed by a 7 km trek. Barakot is connected with the Uttarkashi which is just 100 km from Gangotri Dham. One can reach Kedarnath Dham from Rudraprayag which is situated at just 180 km from Uttarkashi, followed by a 16 km trek. Rudraprayag is 160 km from Badrinath Dham which is the final Dham of the Yatra. If you are looking for more information about the maps and routes of Char Dham Yatra then Visit Here!

How to Reach Char Dham

Nestled among the serene landscapes of the Himalayas are India’s four most revered pilgrimages, namely Gangotri, Yamunotri, Kedarnath, and Badrinath. Every year, many devotees embark on this sojourn which takes almost 12 days if you travel by road. There are two ways to complete the Char Dham Yatra. First by road and trekking and the other by helicopter, the easiest option as Char Dham Yatra is one of the most accessible yet most arduous journeys. We provide Char Dham Yatra by Helicopter, which completes in 2 days and 4 days. It depends on the tour package you will choose. You can book your Chardham tour with Indian Holiday and delve into the divinity of the pilgrimage sites.

Dehradun Airport is the nearest airport from all the four Dhams. You can get a cab or taxi which will take you to the last points till the vehicles can go, after which you need to start your trek towards the Char Dham.

There are two nearest railway stations - Dehradun Railway Station and Rishikesh Railway Station. You can get a cab or taxi to the point until the vehicles can go.

You can easily get buses from Dehradun, Rishikesh, and Haridwar to all the four Dhams. And daily buses ply for these destinations from Delhi and major cities.

How to Reach Kedarnath Temple

Kedarnath Temple is easily accessible by road from Dehradun as it is 254 km from here. You can reach Dehradun by train or flight. The starting point of the Kedarnath Yatra is Gaurikund from one need to trek for 16 km. Kedarnath Yatra by helicopter is another option for those who cannot trek. Read More...

How to Reach Badrinath Temple

Badrinath Temple is situated at 317 km from Haridwar and 335 km from Dehradun. You can reach there by road or by helicopter as well. Regular direct buses are plying between Haridwar to Badrinath Dham. It is directly connected with the motorable road. Read More...

How to Reach Yamunotri Temple

Yamunotri Temple is directly not connected with the motorable road and the trek commences from Hanuman Chatti which is 6 km from the temple. Dehradun is 175 km from Yamunotri dham while Rishikesh is 200 km. You can reach these places by road or rail. You can easily reach to the Yamunotri Yatra by helicopter as well. Read More...

How to Reach Gangotri Temple

Gangotri Temple is directly connected with the motorable road from the Haridwar, Rishikesh, and Dehradun which are situated at 288 km, 234 km, and 250 km respectively. You can reach there by rail and road. Dehradun is well connected with the airways from the national capital, Delhi and to other major cities of the country. Gangotri Dham is easily accessible by helicopter. Read More...

Char Dham Yatra is all about experiencing the holy charm and soaking up the spiritual vibes. The Char Dham route covers Yamunotri, Gangotri, Kedarnath, and Badrinath. We offer meticulously crafted Char Dham Tour packages, which you can choose accordingly. We also offer customized tours that have been designed according to the requirement. Book a Chardham tour with us and delve into the spiritual vibes of these pilgrimage sites. 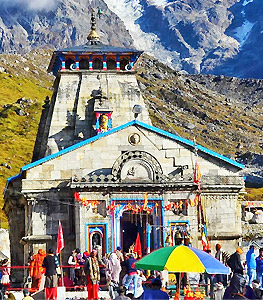 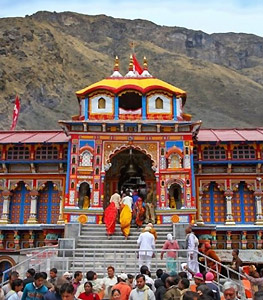 Do Dham yatra by Helicopter

Get Best Deals
View All Packages

Chardham Yatra is the journey to the four abodes which are among the most religious destinations in India, revered by Hindus. It covers the span of Yamunotri Dham, Gangotri Dham, Kedarnath Dham, Badrinath Dham. The entire route is equipped with plenty of comfortable staying options for every budget. Here you can find all the travel information regarding the Char Dham Yatra in Uttarakhand.

Travel Talks From our Blog Chardham Yatra by Road or Helicopter Places to visit during Chardham Yatra 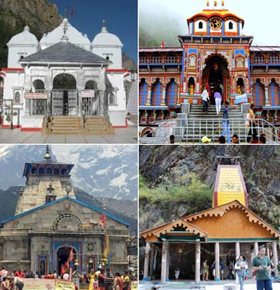 How to Complete Chardham Yatra in 6 Days How to Plan Badrinath Kedarnath Yatra

Unlock your way to a perfect holiday planning with our experts.
Help Me Plan My Trip
Tours on Offer
Plan Your Trip!