Yamunotri Tourism | How to Plan a Trip to Yamunotri

The seat of River Goddess Yamunua, Yamunotri is one of the destinations of the revered Charm Dham Yatra, lying amidst the snow-covered Himalayan ranges, offering a mesmerizing view.


Yamunotri At a Glance
Plan My Trip

Situated on the western side of the Garhwal Himalayas at an altitude of 3,293 m above sea level, Yamunotri Dham is one of the prominent pilgrimage destinations of the Hindus. It is also among the four Dhams of Uttarakhand. The sacred shrine of Yamunotri is the source of River Yamuna. A tour to Yamunotri gives the pilgrims a chance to witness the origin of the holy river the Yamuna and experience true spiritual bliss.

The westernmost shrine of Yamunotri is balanced on the edge of the Bandar Poonch Peak and is frequented by a large number of devotees every year. During the tour, you will also get to see thermal springs. Devotees take a bath in these hot water springs. What sounds even more surprising is that these devotees tie rice and potatoes in the muslin cloth and dip it in the thermal spring. However, Yamunotri is not only popular among pilgrims but also a famous place for adventure lovers. The thrill and excitement of trekking in Yamunotri are matched by very few places. The rugged topography of the land as well as the dense mysterious forests are challenging and enticing to the trekkers at the same time.

Yamunotri Tourism: Take a look at the brief information as it will help you to plan a hassle-free Yamunotri yatra.

History and Legends of Yamunotri

Dedicated to Goddesses Yamuna, this shrine was built by Maharani Guleria of Jaipur, in the late nineteenth century. The present structure however was reconstructed after the original was destroyed by an earthquake. At the entrance of the temple, there is a huge rock pillar, popularly known as Divya Shila, which is also highly revered by the people. To be precise, the origin of the sacred river, Yamuna, is from the Yamunotri Glacier in Saptarishi Kund. This glacial lake is located on Kalind Parbat at a height of about 4,421 m above sea level and lies a km ahead of the temple. To the west of the Kalind Parbat is Bandarpoonch, which divides the watershed of the Yamuna from that of River Ganga.

As per legends, Lord Hanuman came here after burning Ravan’s Lanka and extinguished the fire of his tail in the Yamuna River at Bandarpoonch. The peak gets its name from there only as Bander means monkey and Poonch means tail.

According to another legend, the ancient and highly respected Asit Muni resided in this serene hilly spot. He used to bathe in both Ganga and Yamuna but when he got old, he was not able to travel to Gangotri. Realizing his problem, a stream of Ganga started to flow beside that of Yamuna for his uninterrupted rituals.

Yamunotri Temple opens on the religious day of Akshaya Tritiya, which falls during the last week of April or the first week of May. The tentative date of opening of Yamunotri Temple is 3 May 2022 and it closes on the auspicious day of Bhaiya Dooj. Kharsali is the winter abode of Goddess Yamuna and she reaches here in the palanquin. She remains there during the winters.

Places to visit in and around Yamunotri

Besides the holy shrine of Yamunotri Temple, there are other religious and tourist sites where visitors can enjoy theirs. Here are the popular places to visit in and around Yamunotri Temple:

Surya Kund – Situated near the Yamunotri Temple, the Surya Kund or the pond of Sun is among the many hot water springs. Visitors tie potatoes and rice in the cloth and dip them into the pond. They consider them as Prasad or religious offerings from Goddess Yamuna.

Divya Shila – A reddish-brown rock situated near Surya Kund, which needs to be worshipped before offering prayers to the main deity, Goddess Yamuna.

Janki Chatti – Renowned for its hot water springs, Janki Chatti acts as a base point for the Yamunotri trek.

Phool Chatti – This beautiful village is sprawling with different varieties of flowers including Ayurvedic medicinal plants and colorful fruit trees.

Hanuman Chatti – This scenic hamlet is located on the confluence of Hanuman Ganga and Yamuna Rivers. It is a gateway to several treks and serves as the base point of Darwa Top and Dodital Trek.

Saptarishi Kund – A natural lake that is considered the origin point of the Yamuna River where one can spot many exotic birds.

Kharsali – Dotted with a number of thermal springs, sprawling meadows, ancient temples, and glistening cascades, Kharsali is a quaint hamlet popular for its pristine beauty.

How to reach Yamunotri

If you are looking for ways to reach Yamunotri, then there are various means of transports to travel to Yamunotri Dham. The nearest airport is Jolly Grant Airport, Dehradun located 192 km from Janki Chatti, which is the base camp of the trek to Yamunotri Temple. Dehradun Railway Station is the nearest railhead located at 170 km and the other major nearest railhead is Rishikesh railway station, which is situated at 210 km. Janki Chatti is well connected by the major cities and towns by a good road network. The government-run and private buses run daily from Rishikesh, Dehradun, Haridwar, Delhi, and other nearby cities. You can also board a shared taxi or hire a private cab for Yamunotri.

The best time to visit Yamunotri is in the summer months as the weather remains pleasant and comfortable for visiting the temple. In winters, the region experiences freezing cold with temperatures falling to a sub-zero degree. Yamunotri Temple remains open for six months only that is in summer and the rest of the year the temple remains closed due to heavy snowfall.

If someone wishes to seek the blessings of Goddess Yamuna in winters, then they can go to Kharsali Village where the idol of the goddess remains for six months.

There are not many accommodation options in Yamunotri. However, pilgrims can stay at nearby places such as Janki Chatti, Hanuman Chatti, Barkot, Kharsali, and Sayana Chatti. You can find guesthouses, Dharamshalas, and ashrams on the Yamunotri highway. Some of the places to stay in and near Yamunotri are: 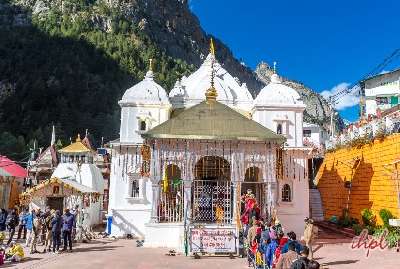 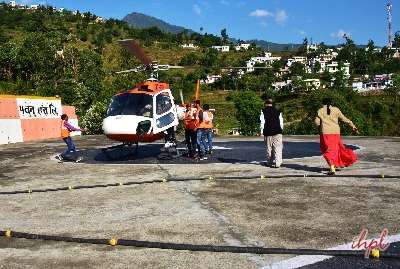 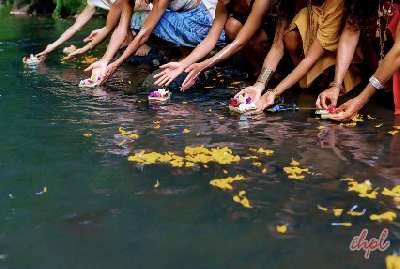